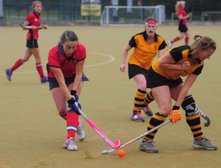 WEYMOUTH ensured they will be competing in this division next season after earning the three points to end the threat of relegation.

WEYMOUTH ensured they will be competing in this division next season after earning the three points to end the threat of relegation.

The game started intensely with the Seasiders finding it hard to penetrate the Firebrands’ defence.

Following an attack from Weymouth, the visitors broke quickly, making the best of their speedy attackers, and slotted a goal into the corner of the net.

Not deterred, Weymouth countered another attack with Sophie Foot passing to Emily Austin whose powerful shot ricocheted off the last defender but she followed the effort up to hit the target.

On a roll, Weymouth pressed Firebrands again and following a lovely through ball from Anneka Rogers, Austin took the ball along the base line and hit it to the penalty spot where Sophie Foot was there to sweep the ball into the goal.

This allowed the Seasiders to finish the first half 2-1 ahead.

Confidently starting the second period, Megan Taylor passed to Austin who once again dribbled the ball into the D and performed a reverse-stick strike which Lynda Drewitt deflected into the goal from the baseline despite a very tight angle.

Weymouth continued pressurising the Firebrands’ defence and were rewarded with their fourth when Austin passed from the right for Drewitt to sweep in the ball for her brace.

The final goal came from Austin with a lovely strike from the edge of the D to round up a rewarding game with the necessary three points for survival.

Player of the match: Gina Brown