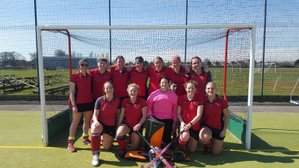 Weymouth travelled away to Plymouth for their latest match and not for the first time this season Weymouth conceded an early goal.

Weymouth travelled away to Plymouth for their latest match and not for the first time this season Weymouth conceded an early goal. Heads went down as Plymouth continued applying pressure to the defence who initially stood firm. The oppositions 2nd goal came from a quick break from their forwards who found the goal. Weymouth defence underwent further pressure when Plymouth were awarded four short corners in a row. With brave running from Jacqui Ridlar and great marking from Gina Brown, Alice Craven and Jo Brazier meant none of the shorts were converted.

Not to be deterred, Weymouth created some good runs forward. Player of the match Susie Stone was a fantastic link between Brown and Emily Austin up the right wing meaning the forwards could get in the D for some shots on goal. A short corner was also awarded to Weymouth which unfortunately they were unable to convert on this occasion. However, Plymouth continued to pile the pressure back on, scoring a further two goals before half time, making it 4-0 when the half time whistle blew.

Weymouth tried not to be disheartened and came out fighting in the second half. Plymouth extended their lead to 5-0 and then Weymouth scored a consolation goal from a short corner awarded after Lynda Drewitt pressurised the Plymouth centre back causing her to hit a dangerous clearance. Niamh Houghton executed a great finish from a well worked short corner which went from skipper Wendy Butcher, right to Austin then across to Houghton on the left. Plymouth scored one more to make the final score 6-1.

Player of the match: Susie Stone