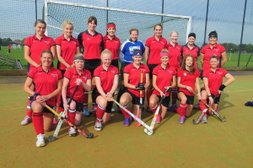 Seasiders start with a bang!

Team: Emily Austin © , Anneka Rogers (VC), Berni John, Sophie Foot, Jacqui Riddler, Caitlin Dive, Olivia Culbreth, Luce Bryne, Susie Stone, Chloe Van Crugten, Linda Drewitt, Emilie Sauven, Rachael Bustin, Naomi Gadian, Alice Craven, Lilly Young .
Man of the match- Chloe Van Crugten
Weymouth stayed at home this week and hosted Bournemouth 2’s who had just been relegated from the league above. Weymouth were anticipating a tough game and were keen to practise their new formation against a strong side.
Weymouth started well keeping their shape throughout with the defensive players marking well and spoiling any attack from the Bournemouth team.
Weymouth created good play in the midfield, moving the ball out to the wingers to enforce an attack. Weymouth gave quick, short passes and had several shots on goal, but to no avail. The Bournemouth keeper was quick to prevent any goals.
Weymouth continued to mark well, with the defensive players feeding balls to the attack and midfield. Quick passes between the attacking players lead to a pass from Luce Bryne to the right post, which was converted by Rachael Bustin with a soft touch around the keeper, making the score 1-0.
Half time discussions led by Emily Austin, kept spirits high and clearly identified roles for the squad.
Weymouth kept their shape, blocking any attack coming down the middle by Bournemouth.
Weymouth had several short corners in the second half, but shots on goal were stopped by the Bournemouth keeper.
Bournemouth broke through the defence with quick play and were running in on goal. A fantastic step up and block by Alice Craven put the dampers on this opportunity.
Weymouth began attacking again with several good runs of play up the right but unfortunately with no conversions. Weymouth were delighted with this win and used substitutions well throughout to maintain the pace.
End result: Weymouth 1 Bournemouth 0
Share via
FacebookTwitter
https://www.pitchero.com/clubs
Recent news