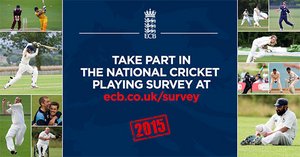 After last years survey - many changes were made to the game. Whether you play a lot or a little (especially), ensure your voice is heard.

The ECB is calling on recreational players to have their say and influence the future of the sport at grassroots level in its third annual National Cricket Playing Survey.

The 2015 survey is now open and aims to generate new and innovative ideas which will help to retain existing players and increase take-up of the sport. Every player, from Premier League cricketers to the occasional Sunday friendly player, is being urged to have their say on all aspects of the recreational game.

Last year more than 37,000 current and former players nationwide responded to the survey - giving the ECB a fresh insight into how best to improve and support the grassroots game.

Nearly 100 leagues have already revised structures or formats this season based on player feedback from last year’s survey.

Players who complete the National Cricket Playing Survey at www.ecb.co.uk/survey have the chance to win prizes! These include signed merchandise and pairs of tickets to Investec Ashes Series and Royal London ODIs.