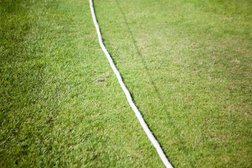 Fantastic performances from two teams of W-HCC U9s at hospital

A Whitchurch Heath team and an All Stars team mostly made up from our U9s squad dominate proceedings against Penarth and Pentyrch: match report here!

The third round of games for the 2015 W-HCC U9s were played on a very nice sunny at our home ground the hospital. Thanks Roger for the usual brilliant work to have the ground superbly prepared!

One of our scheduled opponents could not make it as many of them had a stomach bug, so some rapid reorganisation and a strong understanding of the spirit of the game from the young players meant that we formed a fourth ‘All-Stars’ team managed by Phil whilst Matt and Emily looked after the W-HCC side, so that we had could all enjoy a full schedule of matches.

The first game was a six a side of W-H CC against the All Stars, which consisted of four Whitchurch players plus two very nice lads from Pentyrch. The All Stars batted first and the opening pair was Rhys M and Reuben, followed by the Pentyrch pairing of Owain and Fraser. All faced some quality Whitchurch bowling, with Ashlin, Osian, Alyssa and Ollie all conceding just four runs each. The final All Stars pair of Yash and Pranaav (or Prem as we call him for short) also had to face more relentless Whitchurch bowlers, with Rhys G bowling a wicket maiden and Ojas conceding just one run, keeping the All Stars score to 212. Ashlin (9) and Osian opened the Whitchurch innings and got things moving nicely scoring 11 between them, with Reuben slowing their scoring a bit with a wicket for the All Stars. Ollie and Alyssa batted sensibly for W-H against the All Stars Fraser and Owain, meaning the last Whitchurch pair could relax and enjoy themselves, Rhys G hitting 9 and Ojas 4 against Pranaav bowling fifth and Yash taking the last over. A final score of 235 meant a victory for W-HCC but credit to the All Stars who also played very well throughout the game.

In the second round of games, Whitchurch faced Penarth in a seven a side game on the home pitch and the All-Stars took on Pentyrch, sticking with the easier to understand six a side format. In the Whitchurch game, Penarth batted first, and Whitchurch made an excellent start with a wicket for Ashlin in the first over and only 3 runs conceded by Osian in the second. Penarth had a strong batter (Evan) in the next pair who scored five fours, but Alyssa and Ollie stuck to their task well bowling against him. Rhys G again bowled a wicket maiden and even with a late flourish from the Penarth No5, they finished on a reasonable 229, partly because we gave away very few extras in our bowling. Ashlin and Osian opened the batting for W-H, scoring 9 and 8 respectively, with lots of singles and twos made possible by excellent running between the wickets. Alyssa and Ollie moved the score along to within touching distance of the Penarth total. Rhys scored 3 and Ojas 8 to take the score to 243 and effectively win the game, with ‘big Tom’ playing some shots at the end as the seventh batter to take the Whitchurch score to an impressive 254. The key to this result was no Whitchurch wickets lost!

The All-Stars were also playing some very good cricket by this stage in their game against Pentyrch. The All-Stars batted first with the same pairings, Rhys M and Reuben, Fraser and Owain and then Yash and Pranaav. Everyone batted well and contributed to a good score of around 235. We tweaked the bowling order a tiny bit, so it followed the batting order, as in the first game but Pranaav took over with the final over from Yash, but the secret to the All-Stars was their fielding: lots of good stops, quality throwing and correct decision making saw them take six Pentyrch wickets, mostly run outs, to keep the Pentyrch score to only 305. Six wickets at minus five runs each tells a clear picture behind that result!

In the final round of games Whitchurch faced Pentyrch on the home pitch, and Penarth went over to play All-Stars on the far pitch. Whitchurch batted first against Pentyrch and carried the momentum of the previous innings with them: Osian and Ashlin were assisted by extras to make 22 from their two overs, Alyssa and Ollie’s pairing added 19, then Rhys G (16) and Ojas (9) took the score to a very impressive 275 in six overs, again boosted by no lost wickets. The job still needed to be finished, and Ashlin and Osian opened the bowling with two wickets in Osian’s over really pegging the Pentyrch innings back. Alyssa, Ollie and Rhys G kept up the hard work, and a maiden over at the end from Ojas meant that Pentyrch finished on 214.

In the All-Star vs Penarth seven a side game, Penarth batted first and some really good hitting down the ground in particular meant that they finished on an impressive 240-ish. The All-Stars continued their good all round work from the second game too, and when we arrived at the final over, to be faced by Pranaav with big Tom as runner, the Penarth scorer was telling the fielding side that they needed a wicket. Pranaav did outstandingly well considering it is his first competitive games, with some good scoring shots, but this was almost undone by a run out after calling confusion. However, Pranaav then hit a four off the next to last ball to take the All-Star scores to a couple more that the Penarth score, something like 242!! What a great series of performances from the All Stars and thank you all of them for really understanding the spirit of the game and allowing everyone to play a lot of cricket this morning. Special thanks to Fraser and Owain from Pentyrch for joining in with the Whitchurch lads to make this work!