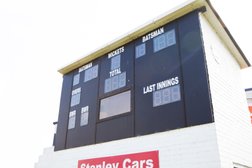 Two wins. One loss. One tie.

Quick update from last weekend's fixtures:
1st XI: A comprehensive victory away to Crumlin, who hadn't lost at home for 2 years going into the game. WHCC batted first with Tibbs, Vanos and Pearce all getting in to the 20s, but it was Nick Hogben (54) and Kristian Rogers (32) who did the damage as we racked up 225-8 off 45 overs.
Donk starred with the ball, taking 6-30, the best WHCC figures since Peter Teague took a 7-for with the 4ths a few years ago. Crumlin could only manage around 130 in reply although one of their guys did get 80.
2nds: 2 wins out of 2 for the seconds - this one very welcome against Barry Athletic who were such a strong side last year. A 4 wicket haul for youngster Adam White, and 3 wickets Aaron Maskill. Barry mustered 171.
In reply Pugazu, who's been so good for the 4ths for a number of years, smashed 73, with Huw Owen making a welcome return to the seconds and compiling a valuable 32. Skipper Mike Bishop saw the side home with 15*.
The thirds had a tough day against Lisvane. Dan Welsh was the sole performer with the bat, scoring 56 opening the batting. Lisvane managed the 124 set by us for the loss of three wickets.
Never a dull moment in the 4ths as they tied with Croesyceiliog III, a side our 3rds were playing up until a couple of years ago. They batted first and looked very well placed with being around the 100 mark for the loss of 2 wickets. Owain, then playing his first senior game, rocked up and took 5 wickets on debut (note: he then played on Sunday and then took another 4 wickets, standards slipping).
I then don't have much more information other than we tied. Anyway, the 4ths are still unbeaten so that's good enough for me!
Overall I'd say a very good opening two weeks for the club with just the one senior defeat out of 8 matches. If as many people as possible can make themselves available and keep performing well, hopefully we can be in for a really successful season.
p.s. If anybody out there would like to write reports on the games, rather than rely on my updates which largely focus on the PlayCricket information, please do get in contact.
Looking back to the start of this post it said, "A quick update". It's turned into a ramble.
I'm out.
Share via
FacebookTwitter
https://www.pitchero.com/clubs
Recent news