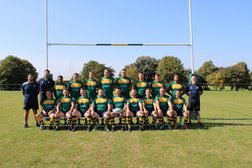 Whitehall 1st XV entertained Drybrook in the semi final of the level 8 County Cup.
Shortly before kick off the heavens opened and the pitch which had already absorbed a huge amount of water in the previous couple of days, had some large puddles over it.
Whitehall made 7 changes from the previous week, and the player count is now up to 37 players in 6 1st team games, continuing from last season’s bad series of injury and unavailability.
Drybrook started the better, and the subdued training session from the previous Thursday continued into the warm up and start of the game for Whitehall.
Drybrook were far hungrier for possession, and looked to keep hold of the valued ball.
Drybrook took the lead with a couple of penalties against the wind. Whitehall scored their only 3 points of the match with a Chris Channon penalty 25 mins into the 1st half.
Whitehall did have a good ten minutes of pressure on the Drybrook line, but could not breach a very determined defence.
Drybrook scored the only try of the 1st half, when their winger crossed in the corner.
Half time
Whitehall 3-11 Drybrook
Whitehall restarted the 2nd half with a kick that failed to go 10 meters, this set the tone for the half as Whitehall continued to give away sloppy possession in very wet and muddy conditions.
Drybrook scored a further 2 tries via their No 8 breaking blind and putting their winger in.
Final Score
Whitehall 3 – 23 Drybrook
Drybrook fully deserved their victory over a very lacklustre Whitehall side.
Perhaps the constant changes in personnel are having an effect, with at least 6 changes in every game we’ve played. It does show however that we have decent strength in depth, and when the players start to come back into the fray, this can only strengthen the whole club.
Congratulations to 18 year old Jake Hollis who made his 1st team debut on the wing, and acquitted himself very well.
This Sat Whitehall play Painswick at home in what promises to be a very tough game.
We will need to up the passion and desire to return to winning ways.