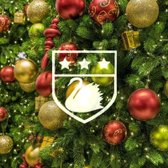 We have plenty to look forward too this December at WOVCC.

We look forward to seeing you and celebrating the festive season with us.

Merry Christmas to all our members and guests.