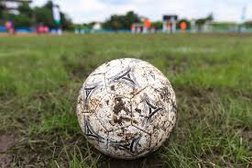 Sunday Football Side Back to Winning Ways

Quarter final of the league cup kicked off on a heavy pitch at Herringthorpe. Chances going for each side in the first half with both goal keepers making tremendous saves. One from the Eckington keeper to keep out a Kris Lee-Green effort. Wickersley keeper Jack Pasley making two great saves. One of which was a brave dive at the oncoming feet of the of the Eckington forwards. Half time came with no goals either way.

The second half began as the first finished with good attacking and defending from both sides. The stalemate was eventually broken 7 minutes from time when Adam Daughtrey gave the ball to the ubiquitous Kris Lee Green who from 25 yards hit one of his trademark screamers low and hard into the Eckington Net.

The side are delighted to announce All Steel Bending on board as a new sponsor. You can visit the website here https://www.allsteelbending.co.uk/