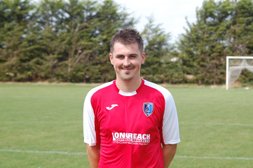 With the pitch looking glossy, Wick returned to the top of the table, but they had to fight all the way to eventually win 3-2 against visitors Ruardean Hill Rangers. The game kicked-off with the sun shinning brightly, but it was Rangers who were first out of the blocks and went ahead after 3 minutes when Luke Brown got behind the Wick’s defence, his shot at goal was parried by keeper Joe Pople and Brown following up knocked the ball in from 5 yards. On 25 minutes, a clever ball by Wick’s Mike Hardiman put Joe Thomas through into Ruardean’s penalty box, however his shot was well saved by Arron Underwood in the Ruardean’s goal. Both teams were beginning to get frustrated, with two of Wick’s players were booked within 5 minutes of each other. Ruardean were mounting pressure on Wick and missed the chance to go 2-0 up when a Luke Brown free kick beat Wick’s wall but clipped the outside of the post. HT 1-0 to Ruardean.

Wick began the second half with some urgency and had two chances within the first 10 minutes, both falling to Mike Hardiman, but he felled to equalise for Wick. The day got worse for Wick when after 55 minutes Steve Coombes scored from 20 yards to give Rangers a 2-0 lead. Wick eventually got back in the game on 61 minutes when Jordan Scott scrambled the ball over the line following a Danny Sheldon corner, 2-1. Wick’s goalkeeper Joe Pople was called into action 10 minutes later to save from Rangers Dan Mason close range effort. Wick began pressing hard for an equaliser, on 70 minutes Grant Hewitt long range effort went well wide, one minute later Alfie Clarke mazy run from inside his own half brought a good save from Ruardean’s keeper after a one-two with Scott. The game changed completely for Wick in the last 7 minutes, on 85 minutes Jordan Scott met a Danny Sheldon cross from the left, who’s header fell to Mike Hardiman who fired home the equaliser. Wick’s man of the moment Jordan Scott then won the game for his team on 88 minutes when he blasted the winner following a Clarke through ball. Both teams then fought out the dying seconds, but the final score remained 3-2 in Wick’s favour.