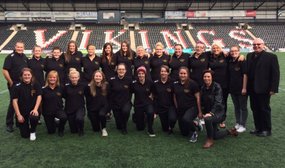 The women's numbers at the start of the season were around 18 committed players. We had a great pre season, training at Centric gym and Wigan Wrestling Club. After the first game the numbers were reduced by two due to injury. We did however field 13-a-side for every game as a Division One team, unlike the previous season were we played games in the main of 11-a-side. The squad was bolstered by the inclusion of 5 players from the folded Leigh East Side and we went from strength to strength.

We reached the quarter finals of the Women's Challenge cup and travelled to Normanton, a Premier side. Other teams had been swept away by Yorkshire side by 70+ points. We entered have time 20 v 0 down but the final score was 30 v 0. So on reflection, against other teams, we performed very well.

We sent a number of players to trial for teams in the Association Cup. Emma Dwyer was called upto England Lionesses, Katie Dean and Emma Beck were part of the GB Teacher squad, Charlotte Foley missed out on another year as an England Student, due to injury. Most disappointing was the exclusion of Jade Aspinall from England Lionesses. She is about to retire from Rugby League, due to ill health, and was excluded as she is unable to compete in the 2016/17 World Cup. This was explained at the start of the Association Cup run. Jade Aspinall is probably one of the top 25 players in the Country and it saddens us that she is no longer able to play.

In June the Chorley side folded and this left us two games short of a number of other teams. We continued winning games and went to Stanningley who, in the previous season, had beaten us by 72 points; we beat them 38 v 14.

Still not having lost we played our last game, at home, against Rochdale Hornets; we lost by a try. This was a horrific game as the referee was found to be related to one of the players (his mother) and the coach (his dad). A letter of complaint was put to the league and from this Referee policy and Coaching policy is being requested to be change so that no other team, throughout the country, can be put in this position again.

This meant our season finished with us lying in second place with two games in hand. This meant additional costs to the club, team and ourselves personally, as the first playoff game became an away fixture to Stanningley, whom we had beat in the normal season. We went to Stanningley and lost by two trys, picking up a number of injuries. Our last chance game came against LMR. We beat them and secured a place in the Grand Final.

We had a fantastic day at our first Grand Final. Unfortunately we lost in the dying minutes but I felt the first experience of being in a Grand Final was the best we could of had. We were very proud that Cyril Leadbetter walked our Ladies out and we are very grateful to him for honouring us.

We had a fantastic following for the final and our coach was full, with many supporters travelling to Widnes by car. They lifted the team so much, they were amazing. One of our sponsors, Nancy Jones of The Bowling Green Wigan Lane, could be heard shouting for us back at the Pub. One of our memories was the support of Billy and of Charlie, who sang 'Penny Arcade' to us on the coach. Sadly Charlie passed away the following Saturday, whilst travelling with the first team; our St Pats family have been very saddened by his passing.

With regards to the girls squad, I received a message from a local girl saying her school Ince Rosebridge High wanted to join a club. I knew two of the Ladies players wanted to coach and Lana McCabe, having her coaching badge, took the lead coach role and Charlotte Foley assisting. The girls play festival fixtures and played in the Chorley Panthers festival and then the Judes festival. The girls season ended in July and the team became U15's from September; the start of their playing season. Our club held a very successful festival and had 110 girls playing. The feedback was excellent from all who participated.

Clubs hold festivals on a rotation system and clubs put themselves forward to hold the festivals. The girls are still being actively recruited and we are looking to set up a U13's team also. I do have coaches in mind for the team.

The Open Age Lancashire origin game takes place this weekend, at Wigan St Jude's 2pm. Jade Aspinall, Joenie Aspin, Charlotte Foley and Armani Sharrock were all invited to train for the squad, as I write this I am not aware of the selected team but I wish them all luck for their selection.

On a final note, on behalf of myself, David and the Ladies and Girls section we would like to offer our thanks to the committee, supporters, sponsors and all other club members who have helped make this season great.

Being at Wigan St Pats means we are a part of a culture that wants you 'to be the best you can be'! Our Ladies team have been the best team in the 2014 Division 1 league. We will continue to expect them to push to be the best they can be and for Wigan St Pats to be a leading club for Women's Rugby League...