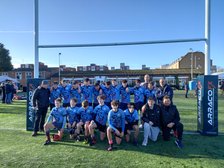 Party at the Park

Our U14s travelled to south west London last weekend to play Rosslyn Park. We’d been chasing this game for some time, having come up against them two and half years ago in The U12s Land Rover Cup hosted by London Irish, in what turned out to be a titanic battle.

As part of a well-planned build up, before Christmas we enjoyed a fantastic trip to Old Northamptonians where our team did exceptionally well against a talented side. It was great preparation for the big outing to London where we stayed at The Marriott Hotel in Twickenham stadium for added inspiration.

The lads were strangely quiet in the warm up, then a little more animated on seeing the size of the Roslyn Park opposition. Then the whistle blew and we were off. The opening 25 minutes (first half) saw us penned back in our own half for long periods and within that time we conceded the first try – a charge down on our own line which opened up the opportunity for the home team to score. The try was converted, 7-0. It seemed the build up and expectation had paralysed the lads with nerves.

So, to a half time reset, some tasty input from the coaches and a clear directive – “relax”. Sure enough, the second half was different gravy and with much more composed rugby, Wilmslow rallied to play themselves back in and with 12 minutes to go our big centre Sam Keep delivered the special ‘moment’ required, taking a crash ball off a scrum and running in a fine solo effort from the half way line. The difficult conversion was missed, 7-5. With 5 minutes to go, just outside the 22, Wilmslow were awarded a penalty in front of the sticks triggering celebrations from the Wilmslow parent group. “Take the points!” you could hear Vass scream from the touchline… “TAKE THE POINTS?!”. The team had other ideas: A tap and pass to a forward, quick ruck, then through 3 sets of hands in the backline with Sam Keep grabbing his second try, diving over in the corner. Another difficult conversion missed, so we went into the last couple of minutes holding a slender 7-10 advantage. From the kick off, Rosslyn Park won the ball back and went to work, pick and drive, pick and drive. Another half dozen phases and the boys from the north tackling for their lives… but they would not let the wall be breached. And then finally, it happened. A knock on from their scrum half allowed the referee to blow the final whistle…. cue Wilmslow Wolves pandemonium.

In summary, the long awaited fixture did not disappoint, with a very close game and Wilmslow running out eventual winners 7-10. Rosslyn Park were great hosts, very honourable in defeat and keen to take their turn in travelling up to Wilmslow next season for the rematch. It would be fantastic to welcome them to Pownall Park and renew rivalries.

Thanks to our parents and coaching team for their magnificent support, to the Club for helping us out with transport and to the players for their outstanding commitment and energy.