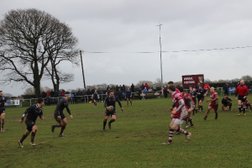 The Wolves were eventually just worn down by a fine Wirral side, who showed exactly why they’re the league leaders.

. Despite a bright start which kept the home side out for most of the first half, Wirral eventually seized total control and by the end it was all one way traffic towards the Wilmslow line. In the circumstances, Wilmslow can take some credit for their tenacious tackling and covering which kept the damage down to four tries, two in each half.

With this win, Wirral moved six points clear of their closest challengers Birkenhead Park, whose game against third placed Widnes, now a massive twenty five points behind, was postponed. The simple statistics speak for themselves in stating how far ahead of the rest this Wirral side has moved. They still have to play Birkenhead Park at home, in what could be the league decider, but unless there’s a dramatic shift in form, they have the title in their sights. It’s been a golden period for the Wirral club, all achieved with an amateur side coming through its mini, junior and colts sections. How far this can take them on the demanding stage of the National leagues, assuming they make it, is pure conjecture but for now they can enjoy their success.

It was a much depleted Wilmslow side which faced them. The whole spine of the side from the previous week at Vale of Lune had to be changed, mainly for injury reasons. Hooker, No. 8, half backs and full back were all taken by different players and they weren’t the only places where changes had to be made. To say that resources were stretched would be an understatement. Nor was their cause helped when the versatile Josh Whitely, who was making a solid impression at hooker, had to leave early on with a dose of concussion and was then followed by the aggressive Sam Cutts for a blood injury. Of course, this gave fringe players, such as Ollie Wilkinson at scrum half, Conor McMurdoch at hooker and Adam Taher at prop the opportunity to show what they could do and to stake their claim for regular first team rugby. None of them let themselves down or threw in the towel in what was a difficult test.

That the match took place at all was in itself remarkable. If the Clatterbridge pitch had been subject to the same volume of rainfall twelve months ago, it would have become an unplayable swamp with ducks, geese and all making it look like some kind of wild fowl centre. Last spring’s drainage contract, however, has made all the difference and it was decided that with no further matches billed for the next three weeks, this game would go ahead and there would be time for it to recover. Nevertheless players and hardy spectators alike were greeted by a fierce squall as they emerged from the changing rooms and the comfort of the clubhouse. At least, the players would have the chance to warm up but the for the spectators it was a case of grinning and bearing in sodden anoraks and squelching boots whatever the weather decided to throw at them.

The Wolves were first to face the elements and for most of the first half made a decent stab at dealing with wind, rain and Wirral. Initially they were solid in their set piece work and the forwards drove close and tight up the field whenever they could. There was still a tendency to try and move the ball wide when it may have been better to have kept it close to the pack but there was a noticeable improvement in ball retention. Inevitably most of the play was in the Wilmslow half but the Wirral threat was at this stage being well contained.

It was unfortunate then or just plain careless, depending on your point of view, that they should be awarded a penalty on around their own ten yard line after a particularly impressive piece of picking, driving and rucking play after ten minutes. Instead of settling for maybe a short ten yard gain, slowing down the game by banging the ball as far as they could into the adjacent Thornton Common Road and then allowing Mike Clifford to do his stuff in the ensuing lineout, they went for the long one. It only found the arms of Wirral’s right winger Sam Broadbent standing all alone on the touchline. Broadbent is a big burly lad and no slouch and he made about forty yards, scattering all around him asunder, before offloading to his open side flanker Rob Pearl now at pace on his shoulder. Pearl took the opportunity to race away and score in the corner. You could almost hear their No. 10, Craig Harvey, saying thank you very much as he nonchalantly added the conversion. How often have Wirral counter attacked and scored from a bit of sloppy play by their opponents? It was just typical of them to capitalise on an unforced error.

Briefly the Wolves responded with some enterprising play from centre Ollie McCall and forced a five yard scrum which unfortunately they lost. A score then would have made things interesting but Wirral took it against the head and were soon back in the Wilmslow half. As half time approached it was still just 7-0. The Wolves had defended well and everything was still to play for when the referee appeared to award Wirral a try from a charge down after they had clearly knocked on. Realising that he actually had his hand out signalling advantage to Wilmslow at the time, it was a perverse decision so he then confused everyone by changing his mind to award Wilmslow the scrum, which he should have done in the first place. Whether this distraction had any bearing on what followed, who’s to know, but Wirral took the ball against the head and right winger Broadbent was eventually able to force his way over after several thrusts had been held up by the Wolves. Harvey knocked over the conversion and it transpired to be the turning point of the game.

Wirral then produced a formidable display of fifteen man rugby in the second half as they took a stranglehold on the game. Their ability to patiently go through the phases and to offload and pass demonstrated that it was perfectly possible to play decent rugby in the conditions. It was of a different order to anything Wilmslow could manage. Starved of possession and still in their own half, when they had probably been expecting to take the game to their opponents, the Wolves play deteriorated to the extent that they could barely string together any coherent play of more than two or three passes. Their game just lost its shape and patience was forsaken for the improbable. Long before the end the outcome had been decided. Pearl soon had his second and third tries, in quick succession just after half time, both from the base of short range scrums and thereafter the Wolves were forced into a frantic damage limitation exercise. They will tackle and cover though and they refused to concede any further scores but by then Wirral had the five points in their locker and were probably content with their afternoon’s work.

It would be easy to lose confidence and become dispirited after being so comprehensively outplayed but there’s only Birkenhead Park, who the Wolves still have to visit, who can be compared to Wirral. None of the Wolves other remaining five fixtures are remotely in the same class as these two. Wilmslow should be able to garner sufficient points from these games to hold onto their league status.