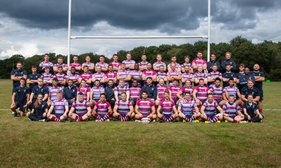 In conditions similar to those at the recent Calcutta Cup game – if not worse – credit must go to both teams for making this match more watchable for the few hardy spectators than their international counterparts had managed.

In conditions similar to those at the recent Calcutta Cup game – if not worse – credit must go to both teams for making this match more watchable for the few hardy spectators than their international counterparts had managed. Despite shipping 38 points, Guildford played their part but just could not compete with Wimbledon’s pack, in attack or defence, and had it not been for a sterling effort by Guildford’s no.8 behind a scrum being driven back at a rate of knots, Dons’ margin would have been even wider.

With the ball like a bar of soap the handling by Dons’ half-backs, Blane Wilson and Steve Boatman, was superb. Wisely in the conditions, they rarely spread it wide, giving it short instead to any one of Dons’ charging forwards to break the gain line, recycle, pick and drive and break it again – and again. It took just eight minutes for one such sequence of play to result in Wimbledon’s first try, when no.8 Chris York broke blind from the back of a 5m scrum and ran in unopposed. Although close to the posts, Boatman considered himself lucky to defeat the swirling gale and make the conversion.

But with Guildford using the wind to make huge territory gains, aided by several soft penalty offences by Wimbledon, and securing their own lineouts (other than those stolen by Dons’ flanker Kane Alboni), it was another 20 minutes before Wimbledon scored again, this time by flanker Jack Flanagan, in circumstances similar to their first. Boatman again beat the wind.

Shortly before the interval, for the first, and almost only time in the match, Wimbledon spread the ball wide and wing Toby White raced in to score in the corner. This time the wind won the conversion battle.

Five minutes into the second half, the Dons’ pack created the try-bonus score with a charge down close to G’s line and a smart pick-up by prop Bradley Ugodulunwa who ploughed over the try line taking two defenders with him. Boatman’s conversion took their lead to 0-26.

With the handling error count on both sides unsurprisingly increasing in the mud, Guildford managed to keep Wimbledon out for the next 20 minutes, but with their visitors now earning penalties at most set scrums the inevitable fifth score came from another period of pack pressure which ended when the referee lost patience with the home pack and awarded Dons a penalty try.

To finish, following a 25m drive by the forwards, a Boatman penalty kick to the corner, and a secure lineout and drive, York touched down for his second of the day to bring up the final scoreline of 0-38.

This was a thoroughly professional performance by all eighteen Wimbledon players, with the pack outstanding. Next week they are at home to fourth-placed Dorking for what promises to be a fairly close encounter.