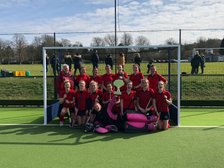 After a double header and 2 wins at the weekend Winscombe firsts have made it impossible for other teams to catch them and have become the Central League CHAMPIONS!

For the first time in the club’s history Winscombe will be playing in the West Clubs Women’s Premier Division.

The celebrations could not quite start, however, and it was early to bed for Winscombe as they were starting British Summer Time with a nice early start against Taunton Vale 3rd XI the following day. This would be Winscombe’s final game in the Central League and they were definitely determined to go out on a high and Keeper and Captain Kate Dennis was determined for a clean sheet.

Winscombe maintained pressure on Taunton Vale and kept the ball in their attacking half making Taunton’s keeper and defensive unit work very hard. The game was goal-less for some time, but Winscombe’s patience and confidence shone through during this time and the goals were opened up by joint Man of the Match Tia Craig, who got her second goal of the weekend.

Winscombe were fast out of the starting blocks and it was only shortly after the first goal that fellow forward and Man of the Match Gabby Richardson followed up with a second goal, after a collective attack from the whole team and a magnificent cross from Sarah Holland that Richardson was patiently waiting for before cracking it against the backboard of Taunton’s goal.

Not to be out done by her other forwards, Holland got herself on the score board, making the score 3 – 0. It was cheers and smiles all round for Winscombe, but with level heads, the game continued as there was still a clean sheet to be maintained.

With this in mind, Winscombe continued to keep the ball right in front of Taunton’s keeper and after being awarded a short corner, Caroline Marsh, was so pleased with her first goal of the season on Saturday she repeated it for Taunton; making the score 4 – 0.

The game didn’t end there and Holland sent the ball flying past the Taunton keeper again following yet another whole team attack.

Taunton not willing to make the final parts of the game easy for Winscombe, launched a last attack down the left which resulted in Taunton being awarded a short corner after the final whistle, but Winscombe’s Caroline Marsh, successfully deflected a determined strike from Taunton’s centre forward off the back line and that was it the game was over, the Central League was over for Winscombe and we were heading into Premier 2. The hard work of vice captain, and former captain Kelly Clark had paid off and the celebrations certainly started immediately for this momentous occasion.