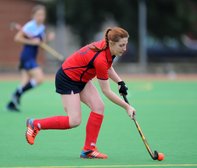 The weekend started with a nervous, but confident battle against Taw Valley’s 1st XI. Taw had travelled up from Barnstable and made it clear from the beginning they had not travelled all that way to give the game away.

Winscombe worked solidly as a unit and it was clear they had promotion in their sights. Concentration was held for the whole 70 minutes and the mid-field unit of Kelly Clark, Holly Tyson, Imogen Marsh, Hannah Preston and Michelle Isgar dominated the central part of the pitch, not allowing Taw any time on the ball.

The forwards Sarah Holland, Hannah Coogan, Gabby Richardson and Tia Craig worked tirelessly to maintain pressure on the Taw goalkeeper and defenders. After a successful win of a short corner, Winscombe’s Man of the Match, Caroline Marsh, opened the scoring for this game and got her first goal of the season after a slick short corner routine. The crowd cheered, but the Winscombe players kept their level heads and it was not long until Tia Craig followed in Caroline’s footsteps with Winscombe’s second team goal, which was created from strong team-work.

On the final whistle, the score was 2 – 0 to Winscombe, and this only meant one thing – it was official Winscombe could no longer be caught by any other teams in the league, and with one game to go Winscombe were to be crowned league Champions!

Player of the match was Caroline Marsh