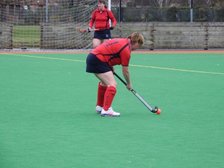 Winscombe 3rds battle hard but lose out to a well-worked goal.

Winscombe knew this week’s match would be a tough one and they were right. The match was high tempo and Mid Somerset pressed hard.

Winscombe keeper Elainna Teare together with defenders Sarah Johnson, Kat Dee, Jo Horwood and Steph Osmant had a very busy first half. But they kept their heads and released the midfielders to build counter attacks.
The best chance in the first half for Winscombe was a cross angled across the D by Gail Izzard which Helen Sinclair and Ella Hutchinson both just missed.

With the score nil-nil at half time, Winscombe felt whoever scored first would win the match and they were unfortunately proven correct – however Mid Somerset did not score until the 20th minute of the second half.

Winscombe managed to clear all of Mid Somerset’s penalty corner attacks and there were 12+ of them with saves and clearances off the line by Teare, Osmant, Dee and Emma Whitehead. Whilst Dee, Horwood and Johnson made sure that the first and second options were disrupted and cleared whenever possible.

Winscombe never gave up and they were unlucky to not convert an attacking short as Maddy Bawden conversion was just above the back board. Hutchinson, Bawden , Anya Laurence and Izzi Morgan never stopped working but it was not to be.

Winscombe 3XI welcome Hanham in their postponed, final league match of the season, on the 7th April.

Player of the match was Elainna Teare