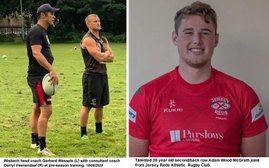 The Club has secured the services of professional coach Darryl Veenendaal and the Army U23 player Adam Wood-McGrath has joined the club.

Darryl who has already had his first hands on coaching session will be supporting Head Coach Gerhard Wessels, further bolstering an already dynamic coaching team. Darryl made 150 appearances for Bedford Blues before joining championship rivals Nottingham in 2015 making in excess of a 110 appearances for them. In 2019 Darryl joined newly promote championship side Ampthill as a player-coach. His particular responsibilities were for team attack and backs defence.
Director of Rugby Leonard Veenendaal said: “Darryl has regularly helped us out over last couple of seasons, his continued commitment to supporting us is boost to our coaching team and we would be foolish not to use his experience. Darryl understands how we want to progress the style of rugby we play and has already made a valuable contribution helping shape how the team is going to attack next season.”
The Club have added to the senior squad by signing the talented Army U23 second row Adam Wood-McGrath who joins from Jersey Reds Athletic Rugby Club.
“Adam is an outstanding young second row, a heavy hitter and a big ball carrier who is also able to slot in the back row. He will complement and add valuable depth to our second and back-row options" said head coach Gerhard Wessels.
Players have a week off from pre-season from the 7th September and return on the 15th September for the 2nd phase of the pre-season schedule. “I am pleased with the boys progress, Strength & Conditioning coach Mark Laws done a great job so far, the players fitness has notably improved from the first week back in mid July, which allows us to get so much more from the technical and skills sessions. We still have a lot of work to do, but we are on target.” said Leonard Veenendaal.
Share via
FacebookTwitter
https://www.pitchero.com/clubs
Recent news