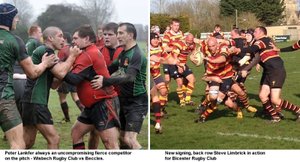 The long serving ex-1st XV player Peter Lankfer will be the scrum coach and Steve Limbrick has joined the Club.

Peter first played for Wisbech at the age of 6 years old. He has enjoyed a varied career playing firstly for Wisbech 1st XV and then Spalding RFC. He also played in South America, North America and Australia. Peter has played across all three front row positions.

Peter’s final season was a recent as 2016-17 when he was still appearing for the 1st XV aged 48 and had it not been for an unfortunate knee injury there is no doubt he would still be playing. Amongst the many awards Peter earned over the years also includes the Long Playing Service Award in 2017. Since hanging up his boots in 2017 Peter has continued serving his club as a volunteer which includes being part of the valued volunteer grounds team. Continuing in his footsteps are both of his sons Henry and Will who have both played for 1stXV Wisbech in recent years. They along with their teammates of 2020-21 season relish being coached by their father.
Director of Rugby Leonard Veenendaal comments that: “I was fortunate to have played with Pete and then have him in my squad as a senior player when