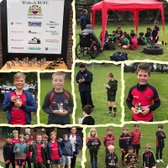 Players and families have been able to celebrate the achievements of last season.

Marcus Hall age grade chairman said "It was important to be able to make sure we did not miss this awards presentation as all of our players put a 100% effort and commitment into training and each game of rugby during each season. It was great to see all of the smiling faces. I would also like to say thank you to all of our coaches and senior players who have helped with Sunday coaching. A special thanks is due to all parents who have supported the young players, and the volunteer helpers who looked after the kitchen and bar during last season".

The efforts of this seasons U11s coach James Cox has been recognised by the Club when he was awarded the Chairman's Cup. James also received the Wildcats Player of the season award at the senior awards event held on Saturday 26th September.