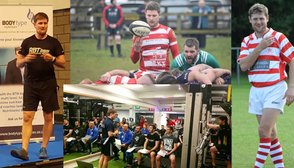 The Club is pleased welcome back Mark Laws as the Club’s Strength and Conditioning Coach ahead of the 2020-21 season .

Mark returns as both a coach and a player from Thetford RUFC where he has played for the last 3 seasons. Mark is no stranger to Harecroft Road, having come through the Wisbech mini, junior and colts sections, as well as playing 19 senior seasons in which he scored 1700 points for the 1st XV.
Mark has worked as a coach with professional athletes all around the world for over a decade This work has included spells with Sheffield United Football Club, Yorkshire County Cricket Club, Castleford Tigers Rugby League and the Chinese Olympic squad. He has been involved in the development of hundreds of elite athletes such as Kyle Walker, Kyle Naughton, Harry Maguire, Joe Gomez, Nick Pope, Joe Root, Jonny Bairstow and former Wisbech GS pupil, and Scottish rugby union player, Ali Price.
During the recent lockdown he has started offering online athlete development programmes for 8-18 year olds anywhere in the world: Go to Mark Laws Coaching
Wisbech RUFC Director of Rugby, Leonard Veenendaal has said: "I am really excited about what we are doing at Wisbech RUFC. We know we have a good group of players and we now want to step up our coaching and the appointment of Mark as Strength & Conditioning coach will only help that. We have a fantastic core of home-grown players we want to develop and what better person to lead this for us than Mark who himself is a Wisbech home-grown player. He has the qualifications, knowledge and right temperament to move our great squad on.”
Further coaching appointments and new player signings for the 2020-21 season will be announced over the next couple of weeks.
Share via
FacebookTwitter
https://www.pitchero.com/clubs
Recent news