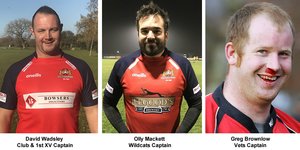 The club will be led by an experienced trio of captains next season. Dave Wadsley Olly Mackett and Greg Brownlow will captain the Club's Senior XVs.

David Wadsley, Club Captain and 1st XV captain, is a club stalwart who will be approaching 40 this season. David is truly loyal having starting his rugby at Wisbech Rugby Club at the age of 11 and deserves praise for his third stint as 1st XV captain. He has always been a crowd favourite at Harecroft Rd for his hard-hitting and intimidating presence. David has led XVs numerous victories including the 2012-13 as Wisbech came close to promotion out of London North-East Division 3. In recent years, his calm leadership has allowed a new crop of young talent to develop at Wisbech. The contribution senior players such as David Wadsley make are invaluable as the club continues to develop and compete in London 3 Eastern Counties.
Olly Mackett, Wildcats XV captain, has played for Wisbech RUFC since the age of 6, being involved at all levels, including captain of the 1st XV and coaching juniors and seniors. He has played numerous positions for the club, finding his home in the front row as his experience grew alongside his waistband. Nearly all of the referees enjoy his constructive commentary of the game whether he is playing or on the sideline. A true lover of the social side of the game that caters for all.
Greg Brownlow, Vets XV captain, is a master of the dark arts on the pitch who has played rugby for Wisbech since he was a mini. Greg has continued a family connection with the Club that includes his father, uncle, brother and cousin. Throughout his time he has been involved in all of the highs and lows, including the heart breaking narrow loss in the divisional semi final of the RFU Senior Vase and appearances for the 1st XV in the County Cup finals. Some say he has allegedly spent more time in the sin bin than on the pitch, but this reputation does not overshadow his excellent playing ability and knowledge of the game. The club is very lucky to have Greg Brownlow leading a Wisbech Vets team.
Share via
FacebookTwitter
https://www.pitchero.com/clubs
Recent news