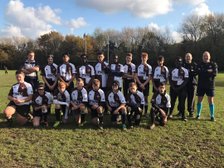 Early exchanges showed that both sides had strong runners but also some great tacklers. It was the visitors who made the first real break, their fast centre managing to evade defenders and sprint clear for a converted try. Witham rallied at the restart and got into the opposition 22. When Tyrik got the ball from the backs, he burst through to grab a try converted by Maleli. Westcliff again set one of their sprinters free and in spite of some spirited chasers, he was able to score under the posts. Shortly afterwards, some strong scrummaging saw Witham take possession. From the loose play, Yami got the ball and powered his way over the line. A couple of tries late in the half gave the visitors a slightly flattering 24-12 lead. The second half kicked off with Witham in a determined mood. After some great attacking play, a penalty was awarded 10 meters from the Westcliff line. Jimmy tapped and popped the ball to Tyrik who was already at full speed. The tacklers tried to stop him but he was through for his second try. Owen had had a relatively quiet game, choosing to release his centres. But when he saw a space ahead, off he went. A couple of steps and hand-offs saw him break clear to gallop in from 30 meters. The score was now 22-24 and the visitors were rattled. From the kick off, Jack gathered the ball and charged around the oncoming pack. He sprinted 50 meters to get to the try line only for the ball to come loose. That try would have put Witham in the lead. The home team continued to attack, but could not quite break through. There was a period that felt like 10 minutes but was probably less, where both sides had possession, drove forward, eventually got robbed, then had to defend and steal the ball back. When the play was eventually halted, both sides needed a breather as the biggest round of applause of the day echoed around. With both sides tiring, Westcliff managed a final surge to secure the win with a converted try.
Final score
Witham 22
Westcliff 31
Share via
FacebookTwitter
https://www.pitchero.com/clubs
Recent news