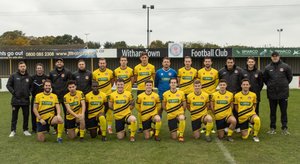 town back into drop zone after defeat

with this result and others in the league going against them witham now find themselves back in the relegation zone and with only five more games to go , at the moment its bleak. in this game with a very strong wind behind them witham started well and had shots from lewis godbold and ryan blackman blocked by the home defenders in the opening minutes , and david hughs the home keeper saved a fierce shot from tom wraight. on a rare visit to the witham goal lawrance yiga cleared off the line during a goalmouth scramble , witham took the lead in the 39th minute when a long wind assisted free kick by wraight was headed in by towns top goal scorer this season LEWIS GODBOLD , but just when it seemed as though witham were going to have a half time lead in the 45th minute plus 3 sam higgins headed in an easily - being the only one of both sets of players - to move, making it look easy .
with the wind behind them in the second half thurrock put the witham defence under pressure , but they fought well and guest made some good saves . in the 79th minute thurrock were awarded a penalty ( hotly disputed ) and higgins scored from the spot although guest got his hands to the ball.
Share via
FacebookTwitter
https://www.pitchero.com/clubs
Recent news