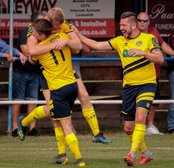 in a tightly-contested fixture at the Simarco Stadium.

Witham Town’s start to life under new manager Marc Benterman remained unbeaten as they drew 1-1 with Bury Town in a tightly-contested fixture at the Simarco Stadium.

It was Benterman’s first BetVictor Isthmian League division north game in charge on home turf and his team were looking to build on a superb 3-0 win at Hullbridge Sports on the opening day of the campaign.Witham had the better of the chances in the second half until a frantic push by the visitors at the end of the game and it remained in deadlock at the final whistle with the two teams having to settle for a point apiece.

The game started with Bury looking to press and the visitors

Things looked good when they took the lead in the 29th minute with a Marcus Bowers goal, but Bury equalised immediately to peg them back
opening spell, but Witham absorbed that and soon settled into the game themselves.

In fact it was the hosts who had the first real sight of goal in the tenth minute.The opening chance came when a ball over the top from Liam Whipps was perfectly weighted into the path of George Bugg.

Fresh from opening his Witham goal account at Hullbridge, the striker held the ball up under pressure from Bury keeper Daniel Barden before laying it off to the advancing Marcus Bowers, but his shot was over the bar.

It was a rare chance in the opening period, though, as both sides struggled to carve out clear cut opportunities despite both looking to be positive and get on the front foot.

However, the deadlock was finally broken on 29 minutes when Bowers muscled his way through after a mix up in the Bury defence and was clinical this time in sliding the ball into the net.

It was a second goal in as many games for the Witham forward, but the lead lasted less than a minute.

Having fallen behind, Bury kicked off and went down straight down the other end where Jake Chambers-Shaw fired in from an acute angle to instantly restore parity.After that blow, Witham responded well and almost regained the advantage on 37 minutes when Bugg surged forward in a central area and unleashed a fiercely driven shot that whistled past the Bury post.

Bugg was then involved again a minute later when he battled hard against a trio of visiting defenders before laying the ball off into the path of Ollie Emsden, but he snatched at his shot and it sailed well over the target.

That saw the teams locked together at half-time and little changed after the break as the game remained tight with not much between the two in terms of possession and territory.

Witham did begin to work some chances, though and had a good opportunity on 56 minutes.

Long throw-ins in the Bury box from Bowers caused Bury headaches all night and it was from one of these that the ball was fired goalwards and when it ricocheted into the path of Bugg, he fired for goal but skewed his shot wide of the target.They then went even closer when Bugg’s persistence won a corner for the hosts three minutes later and an effort in a scramble in the centre saw the ball cannon off the Bury crossbar, before Barden palmed a follow-up effort away to safety.

Bury, meanwhile, looked to up the pace at the other end and a neat move on the right was ended with a flick by Jarid Robson that curled just over the Witham crossbar.

Witham’s pressing continued, though, as the Bury goal remained under greater threat and the home side went close again on 72 minutes.A lovely cross into the area from Liam Whipps found Jamie Guy at the back post and although his shot was going wide it was diverted off the foot of Scott Kemp and went just past the post as a second goal remained frustratingly elusive.

As the game entered the final few minutes, though, Bury pressed forward and looked the more likely to snatch a late goal as they put the Witham defence under pressure.

Witham keeper George Marsh was well-placed to make a save from one sharp effort and he had to make sure he was well-placed with two minutes remaining when an attempted clearance cannoned off a Bury body and flew towards his goal.

The late pressure in the frantic final passage of the game meant the hosts had to stay resolute to make sure they held on to a point, but they did to ensure their unbeaten start to the season continued.