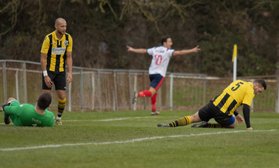 much needed win for town

Two late goals earned Witham Town a vital away victory that was largely due to a resolute defensive performance and goalkeeping of the highest quality by captain Rhys Madden.
For the second successive Saturday Witham plundered three points away from home against a side lower than themselves in the table. After a run of indifferent form the league table is looking a lot more encouraging.
Basildon had won their previous three league matches and scored nine goals. They had a lively start with Ernest Okoh shooting into the side netting in the first minute. Madden saved well from Odukoya in the next minute but Witham took the lead with only four minutes on the click when Scott Kemp scored with a shot from the right.
The lively Brandon McCarthy almost doubled the visitors’ lead but his shot went just wiide.
Despite the barely playable pitch both sides were playing good football. Kemp is in a rich vein of form and he was at the heart of everything in Witham’s attack as the visitors dominated in the early stages. He won a 50/50 ball in midfield and his pass almost found Ollie Emsden in a dangerous position.
Witham were on top but they conceded a goal after 20 minutes following excellent work on the left by Okoh and a shot from Adam Vyse. It was against the run of play but it inspired Basildon. They took the initiative and began to attack with greater resolve. Odukoya was a constant threat on the right and Kris Newby was supporting the Basildon attack admirably. The Witham defence was under constant pressure but Jake Thompson was again in good form and Liam Whipps worked hard.
Witham improved towards the end of the first half and came back into the game. Marcus Bowers shot just over the bar from outside the area. Just after that Whipps tried his luck with a fierce shot from distance with the same result.
Basildon began the second half on the front foot and mounted a series of attacks as they went all out to take the lead. Witham nearly conceded immediately after the restart when a cross from Odukoya was met by Harry Doyle but Madden saved the shot at close range. It was a portent of things to come for Witham and Madden made a great save two minutes later from a Thomas Anderson shot. Basildon attacked in waves and the Witham defence was put under severe pressure. Witham were defending well as a team. Thompson and Ige were in the thick of the action and Madden made a magnificent double save as the pressure mounted. The goalkeeper needed medical attention after saving another shot at point-blank range. This was last-ditch defending but Madden was unbeatable on the day with a string of other saves when goals looked inevitable. This was surely one of the finest performances of his career.
Witham weathered the storm and began to impose themselves. Emsden was effective in midfield and he started a good move by passing to Marcus Bowers, who fed Kieran Michaels in a good position. The defender lacked composure and shot well wide.
Witham’s attacks on the break were increasingly menacing. McCarthy was a handful and Witham had a good penalty claim rejected when he was brought down. There were plenty of chances at both ends. Whipps nearly scored when his shot was well saved by Clarke Bogard. Madden saved a shot from Danny Norton after he wriggled free.
Despite the deepening gloom in low light, the last ten minutes provided an enthralling spectacle. The game could have gone either way but Witham went ahead in the 81st minute when Bowers converted after good work by McCarthy. Three minutes later Madden made another great save from Okoh. As Basildon pressed forward, they were leaving gaps in midfield. This culminated in a third Witham goal in the 87th minute when a through ball found McCarthy. He rounded the advancing Bogard and his momentum took him wide on the left. His cross found Kemp who shot from close range into the empty net.
It was a dramatic end to a remarkably resilient performance by Witham in which the defence excelled. Football is all about goals scored and conceded. It seemed astonishing that Basildon failed to score in the second half, but Witham defended magnificently throughout and took their chances at key moments to secure a memorable victory against a side in good form.
jim purtill
Share via
FacebookTwitter
https://www.pitchero.com/clubs
Recent news