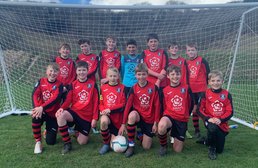 A Spicy Starter for Reds vs Saltdean United

If you were to imagine the worst possible pre-season for a group of U14s, it would likely comprise 3 comprehensive hammerings followed by the shock departure of your talismanic striker a mere two days before your league opener.

Despite this sudden loss of their 37 goal a season striker, the Reds have accepted, regrouped, and then managed to deliver a performance that speaks volumes about them as a squad and is testament to a mental resilience that belies their age.

The first game of the season is always pivotal in setting the tone for the season ahead. Enjoying home advantage, the players were aware they would be expected to step up and fill the gap,and they set about their task briskly - attempting to wrestle the game's momentum from their opponents and searching for an early breakthrough. What followed was a first half of 35 minutes of breathless, end-to-end football that really encapsulates what the game means to kids at this level.

During these early exchanges the Reds enjoyed good possession with the ball but struggled to convert that possession into any clear cut chances. Too often the midfield resorted to hitting long, hopeful balls ahead of Ruairi up top pitting the lone striker against a resolute and well-organised Saltdean back line. In sharp contrast Saltdean were much more creative going forward, working the ball into good positions and forcing a succession of corners that the Reds zonal defence struggled to cope with.

The half-time talk was clearly going to be instrumental in changing the course of the game but, depite the best efforts of the home coaches, the Reds were behind within a minute of the restart. A loose ball out of defence was gleefully pounced upon by the Saltdean midfield, swiftly steered into the path of the attacker who demonstrated impressive strength to hold off the attentions of Ernest and then smash an unstoppable low effort across keeper Leo and into the far corner.

With their tails up, Saltdean pressed, probed and harried and the next 10 mins were utterly torrid for the Reds. A further series of corners tested the back line but, the Reds' rejigged approach was able to resist the onslaught.

Still Saltdean came forwards, and MotM Leo in the Reds goal pulled off two magnificent saves - the first from a corner when his last-gasp dive and sweep managed to divert a goal bound scramble away, the second a simply unbelievable stop when faced one-on-one with the striker. The generous ooohs and applause from all the supporters a barometer of the save's quality.

Despite the Saltdean pressure the Reds were still only the one goal down. In the 58th minute a mesmerising solo run to the edge of the 18 yard box by Luke was finished off with a wicked curling effort that beat the keeper but frustratingly clattered back off the post.

The chance seemed to give the Reds renewed belief, and into the final 10 minutes they were enjoying more possession higher up the pitch. There was a growing feeling that it would only be a matter of time before parity would be restored. When it came, in the 62nd minute, it was from as another fine, incisive run from Luke which saw the midfielder drive towards the Saltdean box neatly only to lay the ball off for Zeph who stepped up and clipped the ball past both the keeper and the two defenders on the line.

Tails well and truly up, and with confidence finally flooding back, the Reds began to exert serious pressure on the Saltdean back line. Where before hopeful balls had been comfortably dealt with, this was a more measured, ball on the floor approach, and it was having a much more positive effect.

With 5 minutes to go another probing run from the rejuvenated Luke was unceremoniously cut short on the edge of the box resulting in a direct free kick from 20 yards. A cute free kick routine (not from the training ground) saw the ball laid off to Ruairi whose fierce strike was blocked only to rebound to the waiting Zeph - his unerring finish saw the ball flash past the keeper and into the back of the Saltdean net - the turnaround was almost complete.

Saltdean, roused by the two quick goals, refused to give up, and the last 5 minutes were marked by a succession of chances, corners, frantic clearances and another super stop from Leo. Overall a hugely entertaining and well matched encounter, marked by excellent sportsmanship and enthusiastic and supportive spectators.

Our thanks to Tony J and all the players, staff and spectators of Saltdean United - we wish them the best of luck for the season, and are very much looking forward to the return fixture.