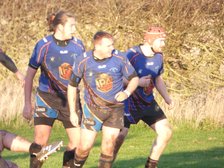 New Year Carve Up
Withernsea RUFC v Scarborough
Due to several players dropping out on the morning of the game, Scarborough travelled down the coast to visit Withernsea several players light. As is the custom in Rugby Union, Withernsea lent a couple of players to even up the sides and make a competitive game. As it turned out, Withernsea were to prove too strong for their North Yorkshire opponents.
On a heavy pitch Withernsea started strongly with Dan Wardman scoring in the corner after good hands down the back line. Mike Penny was the next to score after a barn-storming run by Sam Hartland, who popped to Sean Wrightson, who made good ground before releasing to Penny to finish. Kurt Westoby turned poacher next as he thought quickly to charge down a kick from the edge of a ruck and responded first to collect the loose ball and score from close range. Mike Penny got his second and the home team’s 4-try bonus point after another strong carry by Kurt, followed by good inter-passing from Sam Outing and Sean to put Mike into the corner. Scarborough did get a consolation try for the first half with some hard driving forward runs, which Withernsea could not keep out.
The second continued in the same vein, with the home team looking to increase their 26-7 half-time lead. Sam Outing did not need long to add the fifth try, finishing a simple passing move down the line. Next to score was Dan Wardman following a penalty that was conceded by Steve Tweedy Read for tackling Dan off the ball as he looked to chase his own kick through. Kurt then added his second with 20 minutes to go, chasing Brett McNicholas’s kick through, after the experienced Barnsley lad had put pressure on the visitors’ backs to make a mistake.
The last twenty minutes saw the Scarborough boys lose heart and Withernsea run in more tries to rub salt in the wounds of the lads who had travelled. Chris Sayers drove the ball forward from the kick-off and Rob Hird made a break before passing to Penny, who selflessly put Dan into the corner. Penny finishes with two more tries of his own, proving too powerful for the demoralized opposition, firstly from a good Ethan Wilson pass and secondly from an interception, both from long range.
A final score of 70-7 shows the dominance of the Withernsea team, who travel to Scarborough in 3 weeks, where they will probably face a sterner test.
Many thanks to Martin Priest Decorators of Withernsea for sponsoring the match ball, and to Chrissy and the Staff of the Spread Eagle for offering a temporary home for after match revelry.
Share via
FacebookTwitter
https://www.pitchero.com/clubs
Recent news