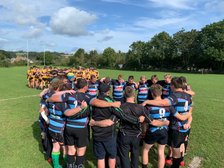 Head Coach, Sam Williams reflects on a massive first Win of the Season in Today's pre-season friendly at Crediton

I am hugely pleased by the impact that the players who came off the bench made, and that as a squad our efforts were consistent in intensity and largely in structure throughout….We still have some basics to refine, and some complexity to add, however this
Head Coach, Sam Williams

Today's game was a bit like today's weather, with a grey start that cleared quickly and finishing off looking pretty sunny. The boys came out in force today and numbers were much more encouraging as we were bolstered by players at both ends of the experience spectrum.

In another game that ran in a 40-20-20 format the challenge after we had grown in performance in the first section was to keep that good things going, despite personnel and positional changes. I am hugely pleased by the impact that the players who came off the bench made, and that as a squad our efforts were consistent in intensity and largely in structure throughout.

We revisited the focus points from last week's game, with the mindset that each of these could be developed. Our intensity in defence was outstanding throughout and is reflected in the score, giving a side that attempted to attacked in a number of ways no real options. The boys took a little while to settle into the attacking side but additions of Valley, Danny and Rory, as well as a huge shift from Mike gave the team real go forward, bringing players like Westy and Bam Bam into the game out wide, and also Jack and Billy in the pack.

Joe and Josh built again on their games last week and the addition of Luke, who also stepped in at 10 and grew throughout this performance. Special mentions to Bam Bam for his outstanding work ethic to create his own solo try, and to Rory in his first game in the UK and brought energy and skill to both attack and defence - rewarded with his own score.

Again the atmosphere in the group was spot on and a real sense of enjoyment in working for each other is shining through. We still have some basics to refine, and some complexity to add, however this was a great way to lead into a rest weekend with no game next Saturday before out first league game.