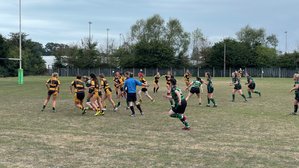 A tough day at the office, but the ladies kept fighting for the whole 80min at Raleigh Park

Preseason is the perfect chance to put the early training into practice and work on positives and negatives in preparation for the upcoming season. This year, the ladies invited the Crediton Ladies to Raleigh Park in a return fixture to last year’s preseason in Mid-Devon.
With three new faces and one player bringing out her boots from retirement, it was also a great opportunity to see how the girls would gel as a team.

With the Withy Ladies playing down the field in the first half, they were required to put their defensive practice into play as Crediton came out of the blocks firing. Their speed with ball in hand caused some early issues for the home side as they used the width of the pitch to good effect to score five quick tries in the opening quarter.

Despite this, the ladies showed early on that they weren’t planning to give up; in fact, they continued to grow and find their feet in the game as they found themselves pressuring the Kirton ladies. A break from Paula Jackson cleared some ground and with the tackle just ahead of the line, managed to ship the ball out to the waiting KC Williams to score. Co-Captain Georgia Skelly’s conversion sailed through the uprights to bring the score to 7-27.

Crediton responded well though with some more fast-paced rugby to get a further trio of tries before the break to bring the half time score to 7-44.

As the second half progressed, the Withy ladies still battled on, showing some good rugby with some promising phases of play. With the slope now in their favour, Crediton’s quick ball handling was still causing trouble for our ladies who were drawn in, creating gaps for the girls in amber.

With ten minutes to go, and still remaining resilient, Withies struck again with the team passing the ball through the hands and out to KC who showed her pace to outrun the defence and score under the posts. Georgia added the additional points with the conversion.

With the full time whistle blowing a little later, the score finished at Withycombe 14, Crediton 85.

Regardless of the score, the girls can be proud of themselves for working well as a team, continuing to fight, never letting their heads drop, even for a second. You learn a lot from defeat and this is exactly the reason for preseason. It’s onwards and upwards from here and on to a successful 2022/23 season.
Huge congratulations to our debutants Harriet, Becca & Leah and to Amy, our returnee – welcome (back) to the Withy Family!

The ladies get their league campaign underway in three weeks time when they welcome the Totnes Bluebirds to Raleigh Park on Saturday 24th September for a 2:30pm kick off.