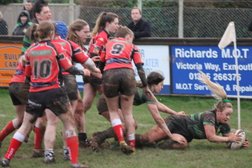 The girls welcome in the new year with a win

The ladies played host to Exeter Saracens Women in their first game of the new year.
With two early penalties and plenty of play in the Sarries’ half, the ladies showed some promising intent. It wasn’t all one-sided though as the Sarries Women kept on hassling the girls and prevent them from scoring. As the visitors gained in confidence from the strong defensive play, they began to earn themselves several turnovers and start to win the possession stats, albeit whilst still being confined to their own half of the field.
The opening score came on 13min when a Withy scrum was cleared out to KC Williams who ran down the left wing to score, Captain Georgia Skelly’s kick bisected the posts to put the ladies 7-0 ahead. Withy topped up the points a little later in the half when, after a period of pressure on Exeter’s 5m line, Katie Down spotted a tiny gap and made a lunge to reach over and score to make it 12-0 just before the half hour mark. Just at the stroke of half time, the ladies got their third try; A quick tap penalty from Paula Jackson saw her link to form a maul and carry the ball across the line. Skelly’s successful conversion brought the half to an end with the score 19-0.

The second half began with both sides enjoying some time with the ball, providing plenty of good rugby. The equality was sifted back towards green and black with a break by KC who got her second try of the game in Clubhouse Corner. With Raleigh Park being treated to more entertaining phases of rugby, a Withies scrum on halfway is cleared out through the hands, finding Captain Georgia eh who sprinted back in the direction of Clubhouse Corner for the ladies’ fifth try of the afternoon.
Despite the growing score line, the visitors refused to give up and kept up the fight in the game, forcing the ladies to show their defensive side. Managing to keep the play in the Withy half, defence turned to attack once again with play deep in the Sarries’ 22’. With the clock nearing red, Withy earned themselves a penalty just outside the 5m line, this was taken quickly by Molly Tregedeon who powered towards the line to score in the corner for the sixth and final try of the game.
Full time: Withycombe 34, Exeter Saracens 0.

The ladies now have a couple weeks off but return on the 30th January when they welcome Sidmouth Ladies to Raleigh Park for a friendly. Kick off will be 2:30pm