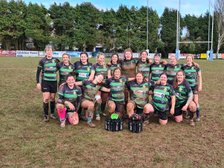 With the season drawing to a close, the ladies were looking to keep their impressive league record up with a trip to South Devon to face the Brixham Sirens.
As the game got underway, the opening ten minutes saw plenty of on field action with both teams finding their feet in the game.
With just over 12 minutes on the clock, Withy’s Josie Lourens opened the scoring with an unconverted try.
This score settled play down for the Withy Ladies who received the restart well to put the play right back in the Sirens’ 22’.
With the scrum set, the ball was sent out to Captain Georgia Skelly who took the first phase ball to score; the conversion attempt was good, and the ladies had a 12-0 lead.
Immediately from the restart, there was to be more points as a well-timed run from Fly Half Laurie Ranft lead to an equally well timed pass out to Skelly who broke through the Brixham defence to score her second try of the game.
With the points starting to build, the hosts got themselves back into the game when their defensive efforts forced a knock on from Withy to regain the possession and make their way back up to the halfway line. With the morning’s rain making the ball a little slippery, the sides exchanged scrums. With the opening quarter at an end, some great Withy pressure in the Sirens’ scrum lead to the loose pass and a great interception by Georgia who sprinted under the posts to complete her hat-trick.
By this point, Withy dominance was beginning to show as Withy managed to capitalise on another Brixham scrum; with some strong counter pushing, the Brixham girls were unable to keep possession, leading to some top-level handling skills to allow Georgia to score her fourth try of the game. With the conversion attempt drifting wide, Withy held a 27-0 lead after 25 minutes.
With the ladies keen to keep playing quick, it wasn’t long before they were back pressuring inside the 22’; with that pressure building, the gap in the defence opened up to allow Paula Jackson an opportunity to break and score.
The hosts now enjoyed a little time with the ball, making the most of a couple penalties to give them some time and possession in the Withy half; but when a loose pass found Laurie Ranft, the Withy Number 10 showed a clean pair of heels as she ran from her own half to score Withy’s seventh try of the afternoon.
Again, keen to show their commitment to the game Brixham made the most the penalties awarded to make their way into our half and to our 10m line. However Withy force the turnover again and with the pass heading blind, the ball makes the way through the the hands and with the players linking up well, Paula made another trademark break to score. Emma Forrester’s conversion topped up the points to make it 44-0. Withy returned the ball well from the restart and almost score once again but unfortunately drop the ball over the line. Brixham clear from the scrum but once again its returned with some force by Bridget Culver who glided through the defence and score in the corner to bring the first half to a close with Withycombe holding a substantial 49-0 lead.

Brixham started the second half well and manage to get some good phases of play together, although the Withy defence worked well, the hosts play the ball well and with making the most of any advantage, they make their way back into Withy territory. Again though, when an attempted kick to touch misses it’s target, Charlotte Leckie was on hand to collect the ball and score.
Brixham kick off and Laurie collected the ball and broke the leading defensive line, the secondary line of defence works well but strong Withy rucking ensures the ball is kept safe and is put out to Molly Tregedeon who makes a break of her own and goes over the line for a converted score.
By this point, Sirens had needed to deal with a lot of pressure but continued to fight; however, with their increasing fatigue, any clearance was making less distance and giving Withy the chance to capitalise on any play. With the 5m scrum in Withy possession, the strong set piece allowed Devona Thompson to walk over the line and with her own conversion attempt sailing through the posts, the score was now at 68-0 with just 54 minutes on the clock.
Still willing to fight, the Sirens found their way down the field after the restart and began to knock on the door at the Withy line, with the penalty advantage, the hosts played well with the ball; with nothing coming, the referee went back for the penalty, but unable to recreate the pressure a second time, a loose ball is again punished as Captain Georgia picked up the ball to run the length of the field and score under the posts.
One final try was still to come just two minutes later as the clock approached the hour mark, the deep kick from the restart is ran back out the Withy 22’ and with some great skills and a wonderful team effort, the ball heads out to Paula Jackson for the final score of the game. With the conversion attempt successfully made, the game is brought to an end, the final score Withycombe 82, Brixham Sirens 0.

A huge, dominant display from the ladies today who worked well as a team to produce their highest scoring game of the season. Despite the scoreline, Brixham fought well to make it an enjoyable game.

The ladies are hoping to be able to welcome Launceston to Raleigh Park for a friendly on Mother’s Day on the 27th March. This will hopefully be confirmed soon so watch this space for more information!

Finally, a huge thank you to Josh Arbury for his commentary to make this match report possible!