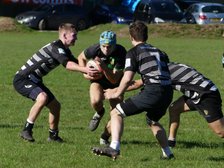 The closely matched game goes the way of the Visitors after an excellent match from both sides.

Withycombe got themselves off to a great start in this all action game between two evenly matched teams. After Brixham kicked off, the attack from Withies won a line out. A short throw was gathered and a quick drive for the line saw Vinnie Neath-Rogers touch down in the left corner with 4 minutes gone. This was brilliantly converted by Jason Farrant from the left side of the pitch.
Brixham fought back to take the ball in to the Withy 22 and drew a penalty in front of the posts which they easily scored.
The Withycombe forwards spent the next phase of the game charging forward allowing the backs to break the line and kept Brixham pressed back in their half until Harry Neath-Rogers crossed the line. This time the ball was held up giving Withycombe a scrum on the 5 yard line. Further attacks kept Brixham defending hard but the Withy number 10, Ben Bolwell picked up the ball and shot through a gap wrong footing the defenders to score. Again Farrant convened and took the score to 14-3.
From the restart Brixham ran the ball purposefully forward causing Withycombe to defend hard and drew a penalty which pushed Withies within 10 yards of their line. Brixham took the ball in and scored a converted try.
The action from the restart was all in the centre of the pitch. As Brixham took the ball forward, a knock on in the tackle gave away a scrum to Withies on the half way line. The ball came back and was moved around well eventually releasing Ben Dawson to charge down the right wing outpacing the defending team to score. Again Farrant converted.
Brixham responded with two more tries to close the score to 21-20 at half time.
The game restarted with intensity, and Withies broke forward to put pressure on the Brixham try line. Farrant took the ball forward and managed to power through the defensive line to touch down. He converted his own try to extend the Withy lead.
Brixham were using their large number of replacements to great effect throughout the game and after another change managed to strike back with 3 more tries to put themselves ahead 37-28.
Withycombe managed to get themselves back into the game as a scrum was conceded by Brixham. In an attacking break forward, Dawson broke through with a run for the line to score. Although not converted, with seconds left to play the score now at 37-33 was close enough to be won so there was everything to play for. After a determined attack and a short breakdown in play, the game resumed with Withycombe winning a penalty. The ball was run to the try line and a massive effort followed by the forwards to win the game. After numerous pick and go attempts to get the ball down, the ball was finally held up and the referee ended the game giving Brixham a narrow victory.
Share via
FacebookTwitter
https://www.pitchero.com/clubs
Recent news