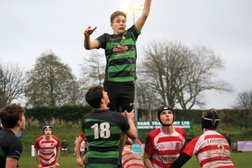 Four tries from the Withies was enough to hold back a second half come back from Bideford and gain victory in North Devon.

It took 4 minutes for Withies to cross the line against Bideford as the Withycombe forwards smashed their way through the contacts to get inside the opposition 22. The speed of passing kept the ball safe and Max Dix finished the onslaught as he put his head down to cross the line. Jason Farrant converted and Withies were 7-0 ahead.
After the restart Bideford settled well and spent the next 15 minutes testing the Withy defence. Strong tackles stopped Bideford progressing much beyond the 22. The opposition came close to getting some points as they were awarded a penalty in front of the posts for not releasing the ball, but instead of kicking they chose to go quickly and ran the ball putting pressure on the Withy try line. The defensive line held and as Withycombe struck back the ball was kicked to touch. Archie Symons stole the ball at the line out and the ball was moved quickly. Farrant passed to Ben Dawson who charged down the left wing past the defence to score.
As the game restarted, Aaron Lee collected the high ball and moved forward. He released the ball to Vinnie Neath-Rogers who managed to move the ball rapidly to Max Dix who ran the ball through the deference and scored his second. The try was converted by Farrant to bring the score to 19-0 at half time.

As the second half began, Withycombe took control and pushed Bideford back in to their 22. A clearing kick sent the ball back close to the half way line but it was collected by captain Luke Davis who ran straight to the line and scored to take the lead to 24-0. Bideford restarted strongly and from this point had the best of the play. The first try for Bideford came from a scrum inside the Withy 22 releasing an attack that split the defence to score. Bideford came back well, eventually closing the score to 24-17 and were finishing strongly. Despite a spirited return showing great spirit, Withycombe managed to hold on and the whistle blew finishing the nail biting game with a narrow win for Withies.