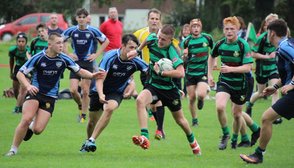 Withies win well away from home

Sallianne Cornish reports on Saturday's game for the Colts

Following last weeks narrow loss to a strong Ivybridge side, Withycombe wanted to bounce back this week away to Sidmouth. Withycombe kicked off playing up the slight slope. The Withy boys started well and have all the ball and keep the pressure on the Sidmouth defenders. The early pressure builds and works well as a quick tap penalty by Finn Musgrove puts Matt Shaw-Smith over in the corner. The touchline conversion is good by Will Cooper putting the boys ahead early on 7pts to nil. The Sidmouth restart is good and they retain the ball for a few phases but Withy get the ball back and good hands sees Vinnie Neath-Rogers score. Conversion good. With a 14pt lead, Withy concede a few penalties and give Sidmouth some good attacking options but a loose ball lets Withy clear their lines. With the immediate pressure extinguished, the boys in green and black recycle the ball well and Will Cornish charges over under the posts. Conversion by Will Cooper is good once again. As the first half progresses, the Withies begin to show real dominance on the field and only their mistakes are giving Sidmouth a sniff of the ball. This pressure allowed Tom Croal makes a lovely line break to scamper 50 meters before Sidmouth put in a try saving tackle. This didn't dampen the spirits of the Withy boys as they kept the pressure on and Will Cooper cuts a great angle to score unopposed and converts his own try. With the score now at 0-28, Sidmouth fight back with a catch and drive on the Withycombe five meter line, allowing Ethan Putt to score for the home side which Tom Mead converts. Soon after Will Cooper replicates his first try to score again and conversion is good. This brought an end to the first half, with the score at 7-35.

The first ten minutes of the second half are pretty even. A nice pick and go by the forwards and consistent effort by Matt Edworthy working tirelessly to gain good ground lets George Messom score in the corner. This conversion was missed. In a keen attempt to gain possession, both sides seem to be snatching at passes which produces a lot of knock-ons. The regular scrummaging from this steadies the game, although does begin to slow it down as well. The deadlock was finally broken once again as Withy get a penalty which they take quickly and spin out to Tom Croal to score . Conversion good. Sidmouth kick off once again, with the kick landing straight in the hands of Matt Hicks who offloads superbly to Will Cornish who sprints 50 metres to score. Conversion good once again. This wasn't to be the end of the scoring for the Withies as soon after more good hands from the Withycombe forwards and backs allows Lewis Hillier to crash over the line. The final conversion was missed.
Sidmouth keep defending but are struggling to keep up with the pace of the Withy players and it’s only dropped passes keeping the score down. A good game all round and hats off to Sidmouth who never gave up .

Next week, the Colts are back in action as they travel down to Torquay for a friendly match.