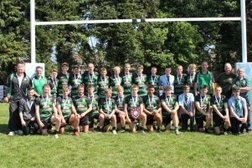 Steve Cornish reports on the Colt's game in Plymouth

Withycombe travelled to Plymouth and both them and their Devonport opposition were looking to better the 17 all draw they got at Raleigh Park.
Withy kick off with the wind behind them. Withy work the ball well between forwards and backs and Matt Edworthy crosses the line for an early try. Will Cooper converts. Play is pretty even with Withycombe just about keeping Devonport in their own half. The Devonport scrum is a lot larger and dominating the set piece but some good work at the break down and Finn Musgrove scores a good opportunist try from 30 yards but the out wide conversion is missed. Services forwards work the ball well up the park but the Withy defence holds and they clear their lines from a 22 drop out. Play stays in the middle of the of the park for the next fifteen minutes. A nice cross field kick by Will Cooper is picked up by winger Joe Tozer who side steps his opposite number to score. Conversion is good by Will Cooper.

Devonport start the second half quickly and use the forwards to push Withy back to defend their line. A Devonport line out, a catch and drive and they score in the corner. Conversion missed. Devonport have got the bit between their teeth now and get the ball out to their back line and their centre breaks through the Withy defensive line to score. Conversion missed. Devonport are using the wind to their advantage and pinning Withy in their own half. Withy get a lucky break and sprint free. Devonport concede a penalty which is kickable but drifts wide in the wind.Services kick back quickly but Matt Shaw-Smith secures the ball and sprints free , passes to Will Cornish who finishes the move to score. Conversion missed. Withy forwards are grafting hard and work the ball back up field,scrum half ,Finn Musgrove chips the ball over the devonport back line .Luke Davis gathers and scores.Conversion missed. Withycombe played some good rugby in very windy conditions against a much larger devonport side but some good individual skills and all round team work won the day for them.