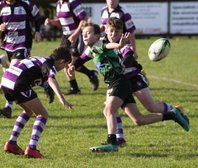 Best of friends, best of rivals

On a bright, breezy and windswept Sunday morning Withycombe U13s welcomed their near neighbours, rivals and friends for what is always an eagerly anticipated clash. And this meeting would not disappoint. With both sides having large squads Sunday saw 50 youngsters take to the field.

From the opening kick off it was Exmouth that were hungrier and more awake to the game starting. This saw Exmouth dominate the opening ten minutes of play resulting in a well deserved try which was greeted by wild scenes. However this proved to be just the kick start the young Withies needed, and with some re jigging of positions on the field Withycombe began to play themselves into the game.

Some quick passes saw the ball out to wing Josh Coles who raced home from forty yards to level the scores. There then followed a period where neither side could get the upper hand , until Withycombe were able to put some phases together and a run from Cody Bate was halted just a yard from the line. The fast thinking Coles was again on hand to scoop up the ball and dive over from a yard out. Exmouth resounded and camped themselves in Withy territory, until with the half running out a turnover saw the bill again shipped wide and again Coles would not be denied from fifty yards despite the attentions of four defenders.

With the teams turned around, and virtually all the Withy line up swapped the game was underway for the second period. This time it would be the young Withies who got on the board first, Andy Maier bursting through to cross the whitewash.

Not to be deterred Exmouth came back again and again, and but for some last ditch defending on the try line would surely have scored more. The try did arrive when the ball was well worked in the centre and they took advantage of some weak Withy tackling. The young Withies were however growing in confidence and would for two quick unanswered scores, and nearly added to more only for wing Bailey Coles to be hauled down just yards from the line on two occasions. Exmouth would score once more before the move of the game saw three quick passes get the ball to Maier who had the presence of mind to off load to flying wing Josh Coles to round off the scoring.

A great mornings rugby from two determined and evenly matched sides. All spectators left feeling they had watched something special.