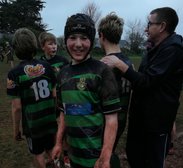 Withycombe U13s mad the trip to Brixham in appalling conditions anticipating a close hard fought encounter, half of this would come true. With pitches being limited due to the weather the game was moved to three different pitches within an hour to get it on.

The small Withycombe squad looked eager and ready all through the warm up. However as the game kicked off they fell asleep and directly from the first ruck the Brixham scrum half scampered down the blind side to open the scoring. This proved to be the perfect wake up call for the young Withies.

From this point on the Brixham team entered Withycombe territory just once in the whole first half. Wave after wave of green and black kept pushing the Brixham side backwards. Turn over ball was used to full advantage, with eager runners and sure hands leading to six unanswered tries before the half was up.

With the second half underway and player changes made the Withy youngsters continued where they had left off. A controlled game was being tested by a more and more physical approach from the home side. Discipline was the key for Withycombe, and they kept theirs as all about started to lose theirs. This resulted in spaces becoming available and with the ball being passed crisply and accurately more scores kept coming. Withycombes kicking game kept the hosts pegged in their own twenty-two until with five minutes to go they managed a consolation score. This still left time for the Withy boys to cross for two more scores before the final whistle to complete what was a very mature, controlled and high quality performance to brighten up a very wet and windy Sunday morning.

All in all six Withycombe players crossed the whitewash to score in a complete team performance.

To be played at Bicton