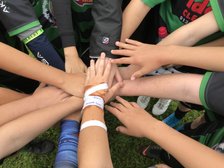 Solid start to the U13 season continues

Withies continued their strong start to the season with a solid win at Sidmouth....

 On a wet and blustery autumn day Withy travelled to the Sidbury pitches to take on Sidmouth in the second match of the season. With Sidmouth playing Honiton as well, their resources were spread a little thin but nonetheless Withy stuck to their task well. And with so many injuries it was going to be an interesting contest.

In the end Withy ran out comfortable winners amassing 15 tries to Sidmouth's 1 however it was a game played in the right spirit - and well done to Henry for reffing it accordingly. The Sidmouth team stuck to their task right to the end......so well done to them.

From the off Withy were onto the ball with a quick turnover and supplying Josh to open the scoring in the corner. Electing to receive Sidmouth came under pressure again quickly and Luca carved open the defensive line to make it 2 in quick succession.

Withy were applying pressure nicely but the Sidmouth defence were doing their best - repelling several waves of attack before a weaving run from Freddie made it 3 scores. With the 1st quarter quickly coming to a close there was still one more opportunity for Zac to go over thanks to several phases of play and the ball going wide for a final score of the quarter.

Second half saw Withy going down that hill - starting how they ended with Ryan firing down that wing after finding himself in some space to score an outstanding solo try. 2 minutes later Zac himself got in on the act after turning the ball over at the ruck.

Electing to receive again Sidmouth invited pressure only to find the chase group surrounding them. They managed to retain the ball however the power of the brothers could not be contained and Luca ran in try number 7 into the corner.

Half time gave both teams a moment to catch their breath.

Having rested a couple of players, and reducing numbers to make more of a contest, Sidmouth suddenly had the bit between their teeth and forced the play down the far flank. 3 or 4 phases completed as they worked their way towards the Withy line - eventually touching down to get onto the scoreboard.

Withy - reeling from conceding - worked to regain possession and control of the game and moved the ball wide. Sure enough Josh popped up to receive the ball and used his pace to go over in the corner. 2 Minutes later the ball again moved down the back line only for Luca to break the line and go over under the posts.

Shortly after, Withy receiving the kick, retained possession only to try the blind side. Jason evaded 2 initial tackles before sprinting down the wing, cutting inside to avoid the covering fullback, to dot down for another score.

The final quarter saw Jason score another wingers try - narrowly avoiding stepping into touch - to take his tally to 2. Playing with the wind, and downhill, Withy were quickly into the Sidmouth half again - this time a superb chip kick over the top from Ollie, a nice bounce only to be collected by Josh to run in unopposed. Zac then scored another 2 minutes later, having just been denied in the cruelest circumstances (Ref?).

With just a couple of minutes left a lovely offload from Zac gave Callum the opportunity to go over - capping a great game for him on his debut at number 8. But Luca completed the scoring in the last minute to give him a personal tally of 4 tries in the game - just pipping his brother and Josh - both with 3 tries.

A superb team effort all-round with notable performances from Noah, Freddie, and Luke in the back line. Callum did a great job of last line of defence with some excellent runs and offloads. Ollie R provided some width with his passing and some excellent kicking - notably the chip for Josh to run onto for his 3rd score. Steven also had an excellent game with good distribution and some good runs. Well done Noah as well in his 1st game for Withy.....

Upfront the power from the front 3, Ryan, Evan and Joe made for a solid platform - some work to do on the scrum but good game all-round. Well done to Callum who rucked well and helped secure the ball on numerous occasions.