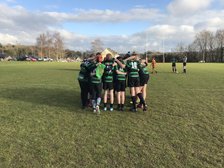 Withy tamed by the Oaks

Withycombe travelled to Okehampton to see if they can capture some of the early season promise.

The weather stayed kind to give Withy a run-out in front of the Grandstand and a decent crowd in attendance. The warmup was good - with everyone seemingly pumped for the fixture.

Withycombe were fielding some new recruits - Todd and Kai drafted into the team after a good showing in training over the last few weeks meant they got to put into practice some of their new found skills.

The boys seemed up for the game and a good spirit prevailed - and it was game time.

It looked like Okehampton were fielding an u15 side - except they weren't and Withy seemed overawed at the size of the opposition. And from the 1st kick this resulted in several missed tackles, and a try conceded right from the off.

2 more tries in quick succession - both as a result of missed talks - gave Okehampton a quick advantage.

For some reason the boys had lost all shape, and the intensity of the warmup had dissipated - and 2 further tries were conceded. The tackling seemed non-existant save a few desperate attempts to bring down their runners - Evan, Freddie, Jason, Ollie and Harry among those trying to fend off the waves of oversized attackers.

In addition to this, the debutants were putting in a great account of themselves with Kai making several tackles out wide, and then laterly in and around the breakdown when switched into the scrum. Also it was great to see Todd continue his improvement - and in one case when a Okehampton player was clean though he was thwarted by a diving Todd who recovered to then bring him down.....fantastic tenacity.

Harry W also put a shift and the effort took its toll with a couple of head knocks - but when on the pitch he looked his usual dangerous self and provided some structure that seemed to otherwise lack in the Withy play. It was Harry who got the ball wide to Ryan in a rare forray into the Okehampton 22 - who then used his pace and power to go over for an excellent score.

Unfortunately Withy didn't kick on and the lacklustre rucking and tackling gave Okehampton several more scores. Withy did finish with a flourish with a superb solo effort from Freddie who received the ball wide and proceeded kick down the line - he chased, and accompanied by Jason, pinned the defender on the try line. A few phases later Evan managed to squeeze the ball over the line for a second Withy try. 60-10 was the final score - with some bruised bodies, and bruised pride. But this team is made of stern stuff, and although there are some lessons to take from this game, the group will inevitably bounce back.

It's a long season and there are some positives from today - the new starters were excellent and showed real promise - and when we got the ball wide we looked dangerous. Ollie P always looked like he might steal the strike in the scrum, and the 9/10 combination of Ollie and Harry gave structure. Some good kicking (Callum and Freddie) also showed we are capable of clear thinking.

But Plenty of work needed on Shape (defensive and attacking), Tackling and Rucking.....so come ready to do some contact on Wednesday!!

We also have Chard next week who are a good side - and so we'll be looking to see a response from the boys!!

Man of the Match: Kai for an excellent debut - keeping high level of intensity throughout the game and so brave tackling. Very well done.