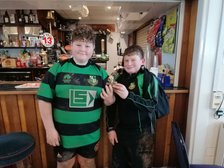 Local derby serves up a treat!

Match produces a thriller as Exmouth hold on despite Withy comeback.....

Exmouth hosted Withycombe U13s in the return fixture of the 2019/20 season. The original fixture went heavily in Exmouth's favour and Withy were keen to show their local rivals that they had improved over the course of the season.

With many of the boys attending the same school there were plenty of bragging rights on offer for whoever came out on top - and despite a frosty pitch the boys were very much up for it despite being a little rusty filling the Christmas break. But with the cobwebs dealt with it was business time.

A great turnout saw 4 subs provide much needed fresh legs through the game - although we did loose Samwise to sickness after the warmup. Get better soon Sam!!

With Exmouth electing to receive, the boys started strongly and were up in the Exmouth half quickly after a decent kick from Ollie R - tackles coming in think and fast - the contact area clearly an a part of the game that has been worked on. Slowly however Exmouth worked their way down the pitch and after a couple of minutes unleashed a runner through who went over to start the scoring.

The forwards were competing nicely in the scrum and won all our scrums as expected. Ollie P hooking well and props Raging Bull and Joe C also getting a good shove on. Behind them was Evan, Ryan and Harry G - working well as a unit at the breakdown giving good protection to the ball. Harry G in particular, who came into the side late, did a fantastic job and got stuck in as expected.

Again electing to receive Withy went deep into the Exmouth half - the line speed was good and Withy put them under some pressure. Unfortunately their large centre pierced the midfield once again to make it 2 - 0 to the home side. Whilst Withy was putting Exmouth under quick pressure, there seemed to be too much space in the midfield and the odd missed tackle leading to the scores.

Withy once again moved up the pitch from the off but this time managed to retain possession and go through several phases of play. As the ball moved wide Withy found space - Ollie R and Harry W working well together, Freddie shipping the ball to Ryan who used his pace to go down the line beating several defenders. He was well tackled only for Zac to collect the ball off the deck, beat 2 defenders and go over near the posts. The deficit halved.

A breakaway try by Exmouth made it 3 - 1 quickly after that, and another shortly made it 4 - 1 at the break.

But the team didn't let their heads drop and found some new momentum in the 2nd half going forward. The pleasing thing was seeing the team starting to work as a unit - working for each other and better structure in defence shored up the back line and made it hard for Exmouth to make any ground. Great covering work from Callum G as Exmouth tried to clear their lines and he took at back at them - shifting it wide to Kai via Freddy. Up pops Ryan who danced his way all the way to the try line! 4 - 2.

With Withy back in the game, and the momentum very much with them, they pressed again after Exmouth elected to receive once again. Stephen and Luke on the pitch along with Lealan - all three doing a sterling job to bring fresh energy to the Withies who were enjoying the best period in the game. With just enough players on the bench to keep it fresh Withy had fought to get back into the game - and Luca went over under the posts for a superb team try to make it 4 -3. What a game!!!

But with tiredness starting to creep in, and Exmouth's fresh 13 still very much in it, they managed to breakthrough once more for a score to maintain their advantage. 5 -3. Ryan then made a mad dash down the wing to ground the ball over the line only for the try to be inexplicably rolled out. The disallowed try didn't affect the boys and they affected an almost immediate turnover following the 5m scrum. With seconds remaining and momentum all Withy, they pressed and moved through the phases. Freddie and Kai combined superbly to very nearly cross the line only to be held up.....before Zac grabbed the loose ball, weaved between 3 Exmouth defenders to crash over on the whistle to give Withy the 2nd half victory. 6 - 4 FT (4 - 1 HT) the scores finished - and what a humdinger it was.

Great performances all-round - with notable mentions going to Ryan for his twinkly feet, Harry W and Ollie R for getting the communication working well and distribution of the ball, Zac and Luca for speed and pace, Harry G for getting stuck in and Lealan, Kai and Todd for their excellent contribution. The whole team contributed to this result.

For me a notable mention should also go to Raging Bull who, after incurring the wrath of the referee in the 1st half recovered to have a blinder after that - bulldozing his way up the pitch on several occasions.

And the award that matters (Donkey of the Day) goes jointly to Callum (for losing his phone and not even realising) and Raging Bull for his assault on the referee!!!

This is the 1st game where we have shown some really excellent momentum - and progress. As Francis said in her WhatsApp, we have come a long way this season as a team and the coaching team are excited about going to the next level as the season progresses. Its a tough game against Chard next week so we need a strong turnout please!! And see most of you at Training on Wednesday!