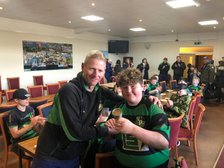 Withies see off Brixham in the season's performance

Revitalised team gel to power past the trawler-men

Following the weeks of rain, Sunday saw the sun come out and shine on this improving Withy team as they made the seemingly endless trip to Brixham. Recent form of late indicated that this team, which are still very much in a transition phase, might expect an improved performance if not a victorious result.

As the team mustered on the lower school field before warming up, the conditions seemed more reminiscent of a spring day - meaning that the ground was firm and grass lush - no excuses from the conditions.

And with a full complement of 18, the team set about their warmup with purpose and conviction. There was a sense that the performance that had been somewhat lacking so far this season (for very fair reasons) could potentially emerge. However there still some factors that might have prevented that. 3 relative newbies in Kai, Lealan and the newest of them all Kean, were all still getting to grips with being part of the team. But there needn’t have been any concern.

A strong pack saw the return of Harry G who was in the thick of things virtually all game. It also saw the excellent hooking of Olly P who didn't lose a single scrum against the head the whole game, to Raging Bull who found some fire from somewhere to put in a perforce of the season that earned him Player of the Day. The ever industrious Evan delivered yet another bruisingly physical performance partnering up Ryan HC who himself made both an impact through the forward line as well as adding pace to the back line - scoring our 1st try in several weeks within the 1st few minutes of the opening salvo.

Starting at 8 was Luca - his brother out with a torn Gluteus Maximus - and he set about his usual business delivering pace and power going forward and rock solid defence. His performance included a superb tap tackle to floor one of their marauding brutes, as well as a 1 handed offload to supply a try in the 2nd quarter - but it was Withies 2nd try that he dotted down after a Brixham equaliser that got the crowd going. Good supply through Ollie R, to Harry who popped it to Luca at pace to make a clean line breakthrough for a score.

Luke is fast making the 9 shirt his own with another super solid performance at half back. He has clearly been bribed to put the ball in favourably, and that he did securing great possession for the back line. His linking up with Ollie R at 10 has proved another successful experiment this season - providing essential supply lines out to the fast jets on the wing. Ollie's distribution was consistently helping us open them up as they couldn't match our runners out wide. Freddie was doing a superb job outside him running lines and opening up space - only for the rotating wingers to carve them open. Harry W was moving between the pack and back line - but on a day when conditions allowed, he was making space for the wingers on demand. He was also responsible for several killer passes out wide to the likes of Birthday-boy Kai. Kai, who is fast finding his feet (Literally), as a paceman out wide, was showing speed in attack and aggression in defence - really testing their back line and narrowly missing going over in the 2nd quarter himself after a lovely phase of play interlinking with Luca. Eventually he was rewarded later in the game with a superb birthday score.

Jason on the other wing was also rarely out of the action - constantly probing their defences and making plenty of ground up the flanks. Callum was also doing a super job at 15 - covering the kicks that rained down every time Brixham were down wind. But Withy dealt with them so much better - almost always running it back and crossing the gain line. Callum was also responsible for another trademark show and go to totally fox the Brixham defence only to run half the length of pitch - ably aided by Luca who literally pushed him all the way to the line....

They were clearly rattled. To the extend where even when Warren offered his refereeing services to the Brixham ref, he was firmly rebuffed - but not told to go behind the yellow rope - which is what I would have done.

Time to rest some tired legs and on came Kean on the wing, Lealan at Hooker, Sam in the scrum, and Stephen on the wing. Also, Noah came on to relieve Callum following his pitch-long try. The changes worked well, and Sam's rucking game helped calm things down at the breakdown and secure better ball. Lealan picked up where Olly P had left off, but also found some space on 3 or 4 occasions to find the space through the middle. Stephen came into the back line and combined well with the wingers to continue finding space for our runners to notch up further scores.

With the scores at 3 - 3 going into the final quarter it was still close - but Withy had definitely had the better of it. Kean was bringing pace and aggression to the back line which is incredible for only his second game - and this really helped open things up for Withy to cut loose and score 3 unanswered tries in the final period. A dominant end to the game giving Withy a rare, but hugely deserved win.

A real milestone for the team - and 2 immensely proud coaches. It was so thoroughly deserved by the boys who have worked so hard and really started to take on board the essence and style of play that will long term enable this team to have a lot more success in the future.

With everyone contributing so much it was difficult to pick just 2 boys for the awards. But on balance Raging Bull deserves Player of the Day because of the significant improvement in aggression and application - getting around the pitch and delivering those killer blows.

The other went to Kai who - even though it was his birthday - had scored a superb try and showed real tenacity in defence - again upping his intensity and delivering a really excellent performance.

As I say it could have gone to any number of boys.....but there's always next week!

See you Wednesday and then Saturday - look out for Comms!