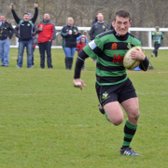 Cup Heroes One Win From Twickenham

Withycombe became the South West Divisional Champions of the RFU Senior Vase on Saturday with an acomplished performance at Swindon College Old Boys.

It was a day reminiscent of the heady days of trips to Wimbledon and Reading Abbey, of which some of the Withy players will still have fond (albeit hazy) memories! A good cup run can invigorate a team, and the nervous tension was palpable prior to kickoff, but Withycombe nerves were settled somewhat when Danny Sansom's first touch of a rugby ball in three months scored Withycombe's first five points of the game on the end of some good hands from the scrum base, to the cheers of a healthy travelling support. Glenn Channing would miss the conversion and a further two attempts at goal from penalties in the next few minutes before Chris Gibbons increased the lead. The former fly-half turned prop was to be found lurking on the wing waiting to do his best impression of a flying rhino, first boshing the Swindon defender out of the way before grounding the ball with his body in the air over the touch in goal area.

Swindon hit back with a penalty on twenty minutes but Withycombe were starving them of possession and beginning to look dangerous. On 32 minutes the catch and drive from the lineout gave Mike Richards yet another effortless try, and six minutes later Eugene badenhorst charged down a kick and collected it himself, running it under the posts for another five points and giving himself a dead leg in the process. Swindon rallied before half time and Withycombe might count themselves lucky that they opted to take the points when a penalty was given under the Wthycombe posts, although it did bring them within three scores of the visitors at 26-6.

If cup rugby conjures up one image, it is that of the unlikely comeback like that of Withycombe's next round opponents Bromley in the corresponding London fixture happening simultaneously! As unlikely as a Swindon comeback looked, Withycombe were taking no chances and the visitors pressed on. With Swindon expecting Withycombe to drive a five-metre lineout, the defence stood off Jon Axon as he caught it, so the big man simply fell over the line to put the result beyond all reasonable doubt. Tom Steer then kicked a penalty on 54 minutes to put Swindon five scores from victory, before Fridge Gibbons scored arguably the try of the tie. A lineout drive saw the forwards peel off the back, with some beautiful front row hands allowing Gibbons the space to go over in the corner again. Swindon rallied in the final quarter and chucked the kitchen sink at the Withycombe defence, although both sides likely knew the result was all but decided. A well worked try and a well-deserved penalty try brought the score back to 41-20. Skipper John Parkin was presented with the South West Division Shield after the final whistle

Withycombe's national semi final is another away day at London Division champions Bromley on Easter Saturday. Anyone looking to come and support the boys on what is bound to be another fantastic day out should contact the club and register their interest as soon as possible.

The costs of travelling for a match such as this are significant and the club will be fundraising to give the club the best chance they have ever had to send a team to Twickenham in May. If you can help out in any way please contact Merv Richards, details can be found at www.withycomberugby.co.uk. Up the WithIes!