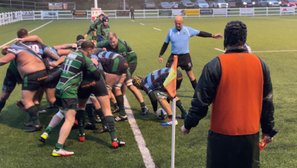 With the wind and rain persistently battering the field, this was never going to be an easy fixture.
Withy got the scoring underway thanks to a penalty from Harry Symons just outside the Ivybridge 22’. With the slight lead, Withy built up the intensity of their attack and were rewarded after 12min as a clearing kick from the hosts was well charged down by Joe Blyth who collected the ball from the bounce and ran the remaining distance to the line to score. Symons’ conversion made sure of the full points available to take a 0-10 lead after twelve minutes.
Ivybridge responded well to the try however and with some pressure of their own, capitalised on some Withy downtime and equalled the scores with two quick unconverted tries.
With the scores level, the play levelled out too with both teams sharing time on the ball; unfortunately, with the wet weather causing all sorts of problems with handling, often possession would change hands via a scrum from the opposing team’s knock on.
The tide changed back in Withy favour after 30min when Ivybridge lost both their Hooker and Outside Flanker to the sin bin within a space of just two minutes. This gave Withies the advantage in the scrum and with that, a second try from Joe Blyth who dotted down after a well driven maul from the scrum. With the conversion drifting wide, the score stood at 10-15 to Withycombe. A score line that was taken through to half time.

The wind and rain continued into the second half, and alongside the dwindling light and slippery conditions on the ball and the artificial pitch, any lengthy periods of play were hard to come by for both sides, meaning that there was plenty of entertaining short, sharp passages of play.
The hosts took the lead after some quick ball recycling saw them dart through the tiniest gap in the defence to score.
Their lead didn’t last long as another driving maul from Withy rumbled across the whitewash, allowing George Doughty to score.
Following a period of end-to-end play in the final quarter of the game, the hosts managed to create the overlap in the corner, with the line approaching, the Ivybridge number 12 swan dived over the line to give his side the lead again.
This lead was almost extended a little later with a penalty kick at goal which sailed wide of the posts and then with the clock in the red, they very nearly scored a fourth, but to the relief of the travelling players and supporters, they dropped the ball going over the line, bringing an end to proceedings with the final score being Ivybridge IIs 24, Withycombe 20.

Today was one of those games that could’ve gone either way, and although disappointing to lose, the boys still pick up a losing bonus point away from home in a good overall performance.

Next weekend, we’re hoping for somewhat better conditions as we welcome Exeter Saracens to Raleigh Park. Kick off will be at 2:30pm