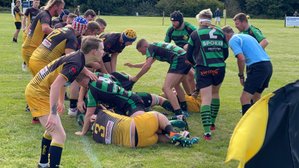 Resilient Withies Hold Out for The Win

With the game underway, the hosts were keen on a quick start as they used forward strength well to dominate the early phases of the game and with this, they soon prised open a gap to allow the aptly named Centre, Simon Quick through the Withy defence for an early converted try on just three minutes. This quick start caught Withy unawares a little but as the game progressed, they began to play with a little more intent and levelled out the match nicely. This was soon rewarded by way of a penalty in front of the posts which was executed well by Harry Symons to get Withycombe onto the scoreboard, 7-3 after 12 minutes.
With the first half progressing into a great, equally matched contest there was a lot of good rugby to enjoy from both sides; this exciting brand of rugby was no more evident after North Tawton collected a loose ball from deep inside their own 22’ and opened a great footrace with Withy’s Jacob Cornish who, with a matter of feet remaining pulled off a cracking try-saving tackle. During the clear out from this tackle, Withy second-rower Bryn Cresswell was shown a yellow for a deliberate knock-on after fumbling the attempted interception. The ensuing penalty from this was kicked between the posts, extending the host’s lead to 10-3.
Just a couple minutes later, that points gap was reduced to just the two points when a great catch and drive from 8m out saw Number 8, Luke Pattison grounding the ball over the line for his third try of the season – so far! With the conversion attempt hitting the uprights, the score stood at 10-8, a score which remained up until half time.

The second half continued in much the same way as the first had played out. Both teams would continue to look threatening when in control of the ball, with each side managing to defend their territories equally as well. It was Withy that broke the deadlock however when a powerful break from Neil Williams opened space for Jason Luff who in turned passed to Jacob Cornish and then back to Luffy, leading to the former Exeter Chiefs player to dive into the corner with the score. The spectacular try was well followed up with a precision touchline conversion from Symons, putting Withy ahead for the first time in the game.
With the lead and the game a little more in their control, Withies started to play with more flair, using each member of the team to create an array of good opportunities. However, with Bryn Cresswell being penalised for a second deliberate knock-on, he was shown his second yellow of the game, reducing the visitors to fourteen men once again. On top of this, the awarded penalty gave North Tawton a shot at goal, bringing the score to 13-15 after 52 minutes.
Like last week, the Withy boys now had a considerable amount of work to do to come away with the victory; and, similarly to last week, this is what they did as they upped the tempo to continue to hold on, playing some good rugby in a thrilling end-to-end contest.
Throughout the final quarter, the hosts worked hard to regain the lead and even had two opportunities to steal the lead with two kicks at goal, however much to the relief of the travelling players and supporters, both attempts drifted to the right of the posts, keeping the slender lead intact. A lead which was held right through to the final whistle thanks to some top defending from the Withy boys. The final score North Tawton 13, Withycombe 15.

With three wins in a row, Withy move up to third in the table and have started to gain a bit of momentum. Despite seven changes in the side from last week’s game against Honiton at Raleigh Park, they were able to draw from the depth of the squad, welcoming back Neil Williams and Vinnie and Harry Neath-Rogers into the squad as well as a playing debut in green and black for Jason Luff.
All four had a good game and fitted back in well to the side to bring an exciting look to the Withy camp.
Thanks also to the impressive numbers of supporters that came along to cheer on the boys this week – your support is hugely appreciated! We hope you can all join us again next Saturday when we welcome South Molton to Raleigh Park. Kick off 2:30pm.