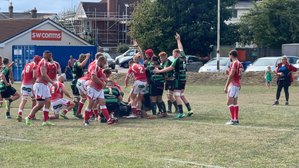 With the new look league structure allowing for 2nd XVs to join the action; the Withies’ opening game against Barnstaple 2nd XV was always going to be a difficult one to judge ahead of kick off. With their 1st XV playing their trade up in National League 2 West, the boys knew that their 2nd XV wouldn’t be too far behind when it came to skill on the pitch.
With this in mind, our boys looked to embrace the challenge and get their league account off to a good start.

It was clear from the off that the Withy boys had the upper hand up front with the first two scrums being won against the head, the first of which earning the boys a penalty. When it came to the running game, this was more evenly matched, with the visitors returning the ball to the wing on regular occasion.

Barnstaple took the first points of the game after 6 minutes when they managed to draw open a gap to allow the inside centre through and score. The scores were levelled just five minutes later with an extended period of Withy pressure inside the visitor’s half. With the driving maul well established and penalty advantage adding a level of protection, confidence grew and with the maul rolling further forward, this allowed Jack Fear to open Withy’s account for the season with a try in front of the supporters in Clubhouse Corner.
With strength in the forwards, Withy enjoyed large periods of time with the ball, keeping the pressure on the confident North Devon side who themselves would enjoy time with the ball, looking more dangerous when running with the ball.

It was Withy that would score next following more sustained pressure deep inside the Barnstaple 22’ with a second try in a similar format to that of the first, this time Luke Pattison was the man who came up with the ball to put the boys in green and black 10-5 up after 30 minutes.
The final ten minutes of the half saw more action with Withy Fly Half Ben Bolwell being shown a yellow card for a high tackle. The visitors made use of the man advantage, exploiting the gap with a try next to the posts on in the stroke of half time to take a narrow 10-12 lead into the break.

With the second half underway, each team enjoyed time with the ball, equalling out each other’s progress up the field to keep most of the play within the middle third. However, in a well-worked phase of running rugby, the red and white overlap was created and Barum’s lead was extended to seven points with a try in the top corner.

With the skills of each side levelling out the play, there was plenty of good rugby to enjoy and although there were no further points scored by either team, it didn’t mean there wasn’t a lack of action on the field.

With just five minutes remaining, Withy put in one final push in at attempt to level the scores, but with Barnstaple equally as keen to maintain the lead there wasn’t a way through. With the clock now in the red, the ball had found it’s way back into the Withy 22’ and with the penalty awarded to the visitors in a kickable position it looked like the lead could’ve been extended further past the seven points needed for the losing bonus point, but in a strange decision the ball was taken quickly and kicked into touch to finish the game to secure that losing bonus point for Withy – a point that was thoroughly deserved against the strength that the visiting side had brought along.

The Withies make the short journey up the A376 to Exhibition Fields next Saturday to face newly promoted Exeter Saracens, we had some great travelling support last season, and we hope you can join us once again this year to cheer the boys on.