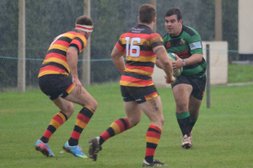 Composure The Key For Withy

A composed display from Withycombe's youngsters saw them to victory in the rain at Raleigh Park.

Saltash made their second trip to Devon in two weeks, having shipped a hundred points at Exeter University the week before. That proved to be no measure of the mettle as the play went tit-for-tat in the opening exchanges. The sides exchanged tries early on, some clever interplay between Matt Williams, Ben Mardle and Rob Hayes down the short side leaving the lethal Hayes with what he would consider a straightforward finish. Pugsley converted, but Saltash hit back straight away, full back Ryan Cruickshanks converting his own try to level the scores at 7-7.

Withycombe for once had the edge in the set pieces, comprehensively out-scrummaging the visitors, while line-outs were a free-for-all as both sides struggled for consistency. The weather proved to be the biggest villain to both sides as their eagerness to move the ball was often their undoing. The Ashes struggled in the tackle though, with Withy hooker Liam Cullen a constant pest, adn it was one of his steals that opened the door for the attack that would see Terry Mears dive over in the corner to put Withycombe back in front at 12-7. Saltash finished the first half with a flurry, slotting one penalty before the last attack of the half came to an end with some last-ditch Withycombe tackling.

The second half was balanced on a knife-edge, and it took 26 minutes before the first points would be scored when Jack Pugsley kicked a penalty to edge Withycombe further ahead. Saltash's last major attack came to nothing when a lineout on the Withycombe five metre line gave rise to some vicious defence, including a withering hit from centre Freddie Fraser, who almost did more damage to himself in the process.

Withycombe built on that to put the game beyond doubt when supersub Glenn Channing's deft crossfield kick was collected by Rob Hayes whose offload found the hands of man-of-the-match Fraser, who gratefully skipped underneath the posts. Pugsley's conversion made it 22-10 and a second win on the trot for Withycombe. Hayle await next week for another testing fixture in a league which is fast appearing to have no easy games.