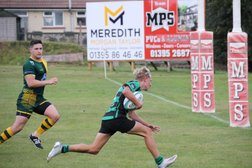 Following last week’s strong season opener against Bude, the youthful side went into this game with a level of confidence that they would be able to hold their own in the big matches. They also knew that a visit from Plymstock Albion Oaks would bring another tough game.
Early points on the board would be key and that’s exactly what happened as early pressure play in the Oaks’ 22’ saw the ball passed across the field to Matt Rye who, with a yellow and green wall approaching, grubbered the ball into the try area. Rye won the foot race against the defenders to pounce on the loose ball and score the opening try after just five minutes. The touchline conversion fell agonisingly short of the mark, leaving the score at 5-0.
Unfortunately, this early score triggered a bit of strength in Plymstock who themselves managed to create a gap in the Withy defence, allowing Flanker Jack Green to dart over the line at short distance to level the scores.
Withies’ strength in the pack took a blow shortly after the score when an injury to No.8 Luke Pattison forced a change early on. Even despite the change, the Withy boys continued to play well, pressuring the visiting side at any opportunity as well as smothering any attacking move from Oaks.
The Withies pressure was rewarded, and they managed to get themselves back in front after 26 minutes as the boys were awarded a penalty a few metres outside the 22’. The boys opted for the posts and Will Cooper’s pinpoint accuracy saw the ball sail through the posts to give the team a 3pt lead at 8-5. Once again though, the scores were reset just three minutes later when Oaks got a penalty of their own from a similar position to once again tie the scores at 8-8.

As the second half kicked off with the slope in their favour, the boys would’ve liked to have turned the screw a little more, but with several breaks in play due to injury the team dynamic shifted a little with a higher amount of defensive play needed. This was working well though as they continued to extinguish any efforts made by the visitors to travel any real distance up the pitch.
As the hour mark approached, however, the tiredness in the side showed as Oaks managed to break through the middle to allow clear passage for Mike Hunt to score under the posts for a converted score.
Despite being behind for the first time in the match, the boys continued to battle. The stamina in Plymstock’s pack was showing in the battle of the forwards, but in the backs, it was still our boys who were on top. This was most evident as the diminishing clock was beginning to threaten a loss, a quick tap penalty was taken by Ben Bolwell who managed to carry the ball a good third of the pitch, shrugging off the tackles to compete his solo run with a try on his competitive debut for the senior side. Celebrations from the supporters rang around the field and increased in volume when Cooper’s conversion attempt bisected the posts to once again bring the scores level to what soon after became the final score at 15-15.

After the game, Head Coach, Sam Williams said: “The boys battled a sizeable team and stuck to the task today… We continue to build and have made a solid start in this league, against teams that finished the last competitive season in the top 6. We continue to build and I'm sure it's going to click sooner rather than later, with that said I'm excited about next weekend already!”

Another tough challenge awaits the boys next week as they travel towards Mid Devon to face Cullompton at Stafford Park. As ever, your support is appreciated as the lads continue their strong start to their league campaign.