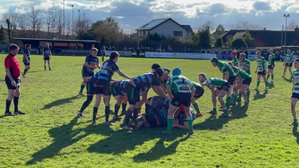 Honours Even Against the Hornets

With the sunshine beaming down on Raleigh Park and the sidelines filling up nicely with support the game got underway. Straight from the kick off, the action began! Newquay kept hold of the ball for much of the early exchanges of the game, but thanks to some great defence from Withy, they were made to work hard for every yard gained. Their hard work would eventually pay off as they were awarded a penalty inside the 22’ just to the left of the posts and an easy opportunity to get the opening points of the game with a shot at goal.
Withy replied well and, with the restart began to put together some good phases of their own as they headed towards the Newquay line. As the play entered the 22’, Withy were awarded the penalty. Fly half Adam Morris saw the opportunity ahead of him and took the penalty quickly; a couple of passes later, the boys were well placed on the try line to allow Max Cooke in at the corner for Withy’s opening score.
From this point, the close nature of the game was evident as both sides enjoyed plenty of time with the ball and playing some great rugby. Although Newquay enjoyed the more of the possession, that Withy defence remained strong to deny them any points. With the first half drawing to a close, Withy enjoyed more time with the ball, but the visitor’s speed to the breakdown would be as effective in stopping any Withy points.
With the clock in the red at the end of the half, Hornets thought that they had scored but Withy had denied them with their hands holding the ball off the line, the opening half was brought to an end with the Withies holding a slim 5-3 lead.

Both sets of supporters continued to be treated to some great rugby as the second half played out its opening minutes as the possession transferred between the sides with the ball remaining largely within the middle third of the field. This exchange of play remained the case for the first quarter of the game with both sides still very much in contention for the win.
With this being the case, both sides were keen on the victory. Withy had the first push with multiple phases deep within the Hornet’s 22’. With a series of penalties against them in the 5m channel, Newquay found themselves a man down after having a player sent to the sin bin. This left a weakness in the pack that could be exploited by Withy and they did just that; a mini break by Adam Morris brought the ball agonisingly close to the line, however the ball was quickly recycled out to Luke Pattison who snuck in within the pile of players to score. Harry Symons’ conversion opened the gap to 12-3 after 70 minutes.
Newquay responded immediately however with a try of their own under the posts just 4 minutes later to close that gap back down to just the two points.
With less than 5 minutes left on the clock, Withy extended the lead thanks to a well taken Symons penalty.
However, this wasn’t to be the final score of the game as when a stripped ball by Withy was adjudged to have travelled forwards, Newquay made the most of their scrum to open up a gap to the left of the pitch and score in the corner in the last play of the game. With the conversion attempt hitting the uprights, the final whistle blew with the scores tied at 15 points apiece.

Overall, a fair result from a great game played well by both sides. The boys can be pleased with their performance today; with the ever-growing injury list leading to a variable mix of experience and last-minute call ups, the boys worked well as a team and put together a good game of rugby.

Next up for the Withy boys is a trip to the English Riviera to face Torquay Athletic next Saturday. Kick off 2:30pm.