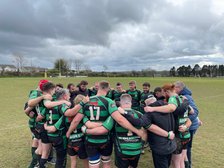 Withy put an end to Veor’s 6-game winning streak at home as a thrilling game of end-to-end rugby finished in a win for the boys in green and black.
The boot of Fly Half Tom Cooke proved vital today and it got the scoring underway after just two minutes when an opportunity for a kick at the posts from the 10m line proved too tempting and Withy took the early 3-0 lead. Following a missed attempt from a similar distance on the other side of the field, Tom was on target to double the lead after 12min.
After some strong opening rugby by Withy, a slight slip in judgment saw the boys drift offside and allow Veor a chance at goal to half their deficit.
Withies were on a mission though and continued to look strong and cover good ground across the pitch. With the half hour mark approaching, a great stripped ball from Mike Richards from within the Veor half was recycled through the hands and out for a chip kick, with Veor knocking the ball forward in the collection, it landed in the hands of Jack Fear who ran the remaining few yards under the posts for a converted score.
With the points gap widened, the hosts hit back with some good rugby of their own and forced the penalties to gain possession and territory back, eventually getting three points for their efforts.
The points balance was swiftly addressed though as, from his own 10m line, Tom Cooke hoofed the ball between the posts to regain the 10-point lead.
Veor continued to push too though, and they put themselves back into the game with a converted try through Number 8 Ashley Lawton to bring the half to a close with the score at 13-16.

The second half started with a bang as, almost immediately from the kick off, another chip kick found the hands of the speedy Withy Scrum Half Ben Bolwell who sprinted down the wing to score the first points of the half. Cooke’s conversion extended the lead back to 10 points.
Throughout the third quarter of the game, Withy continued to play some great rugby, but so were the boys in black whose counter-rucking made Withy work hard to maintain the ball. Sometimes the boys tried a little too hard, coughing up the penalty. This is what lead to Veor’s second score as a well executed catch and drive from the 5m line saw them cross the line and bring the score back to within 5pts. With just the 16 players making the journey, the number of tired bodies began to grow, and a short period of loose play saw two penalties kicked by Veor as they took the lead for the first time. The boys wouldn’t give up, but their jobs were made more difficult as with both teams on a final warning for the sin bin, Jack Fear was next to infringe and was sent off the field for a 10min break.
Despite this, Withy scored next with their 4th penalty of the game to retake the lead with 10 minutes remaining.
At this point, an already exciting game ramped up another level as 5+ minutes of heavy defence on their own 5m line saw Withy fight to keep their lead. However, with a penalty in front of the posts, Veor’s Luke Johnson had the easy task of the kick to put his team ahead with little more than 4 minutes on the clock.
In other games, this would’ve seen Withy throw in the towel and accept the losing bonus point, but they weren’t done this time! With the penalty against Veor being awarded immediately from the restart, Cooke stepped up to kick from a difficult angle; as the ball sailed through the air, it appeared to have drifted wide, but a last-second curve saw the ball sail through the posts to huge celebrations from the visiting crowd. Withy had the lead once again and with the ball back in play and the clock in the red, Withy had one final penalty, one of which that would once again bisect the posts to send Withy back to Raleigh Park with four points and the win.
Final score Veor 27, Withycombe 32.

An outstanding performance from each and every player for the game of the season so far; especially against a team who are so strong at home, having only lost twice at home this season.

There’s another huge task next weekend as we host table-toppers, Pirates Amateurs at Raleigh Park. Kick off 2:30pm.